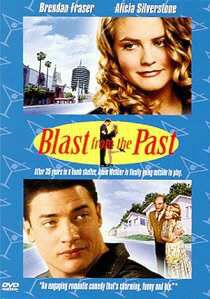 ReviewComedyRomance
Review Article Go back to homepage
Adam Webster was born and raised for 35 years in a nuclear fallout shelter and he's about to get a taste of the 90's in Los Angeles.
Brendan Fraser, Christopher Walken, Sissy Spacek, Alicia Silverstone, Dave Foley, Carmen More
Romance, Comedy
1
1 Hour 52 Minutes
Thank you for supporting DVD365.net when you order using the link(s) below.
Buy DVD
Story

During the Cuban missile crisis the world is rightly worried about the possibility of nuclear war. Even before the crisis American families were building and installing their own nuclear bunkers. Once such family are the Websters. Calvin Webster is a scientist working for the government and he intends to survive a nuclear war. In preparation for the event he has built an impressive self sufficient bomb shelter under his house.

After a speech by the president he decides that it would be best for him and his heavily pregnant wife Helen to take refuge in the bunker until the crisis blows over. Unfortunately, a fighter jet is experiencing problems and careering out of control towards the Webster's home. When an explosion rocks the bunker Calvin assumes that war has broken out and seals the bunker for thirty five years. If that wasn't enough the excitement has got too much for his wife and she's gone into labour and given birth to a son.

Because Calvin kept his bunker a secret not a soul knew that it existed so it was assumed the family perished in the plane accident. Little did they know that they were in their underground bunker sitting it out until the radiation levels dropped. As the years past they brought up their son to be the perfect gentleman whilst life went on in LA and changed the once leafy suburb to a run down area of the valley.

When supplies run low his father decides to take a chance and head to the surface in an NBC suit. Once on the surface he soon meets a transvestite, who he assumes is a mutant, and a drunken bum vomiting in the gutter, assumed to be suffering from radiation positioning. He decides they need to be hidden for another 35 years and naturally, the mother is none too pleased with this. When his father is taken ill Adam is forced to venture in to the bright unknown for supplies.

Armed with cash and baseball trading cards, now worth a small fortune, he heads to the surface for supplies. He soon meets up with Eve, a modern LA woman starved of a loving relationship, and he soon seeks her help in gathering the supplies and a non-mutant wife. Naturally a romance soon blossoms, but things don't quite go to plan when Adams dated views of the world cause comical, but sometimes useful, moments.

The picture is bright and colourful with no signs of artifacting or outlining. The deliberate dulling and high contrast of the colours in the early stages of the film is quite effective, giving it an authentic 1960's look. Once outdoors the bright sunny days of LA do give the picture a bit of a hard time with the high contrast levels at times, but the night time scenes are handled with ease.

The sound is just as impressive with some nice ambient effects in the surround channels and clear and precise dialogue in the centre channel. One word of warning though, you may need to be prepared for large explosion after about 10 minutes of the film. After setting the volume to a pleasant level for the dialogue the neighbours may end up thinking a war has started in your living room when they suddenly burst into life.

The menu is nicely animated and the extras are sufficient, if nothing really to get over excited about, with the usual trailer and a bizarre lover meter game. Owners of a DVD equipped PC will get a bit more value of the disc with a number of additional features and games on the DVD-ROM. Also, people who don't like widescreen are catered for with the film screen edition of the film.

Does Christopher Walken ever play a part badly? His portrayal of the "mad" scientist father Calvin is comical and brilliant, as is his slowly maddening bottle swigging mother Helen. Everything is just perfect in this light hearted comedy with brilliant acting from everyone. It really is a feel good film that you can watch over and over again and still laugh at the visual jokes. Brilliant.