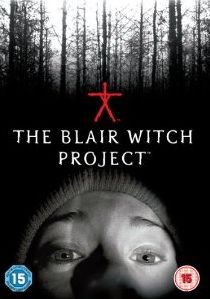 The film is set over 8 days and nights and charts the dramatic downturn in events which eventually leads to the disappearance of the three students. Basically the students are making a film about the legend of the "Blair Witch", but unfortunately in doing so they get lost. Morale deteriorates, hunger and thirst set in and the students start to get to each other until the final night.....

I'm not going to say any more because it may ruin the film for those who haven't seen it, but suffice to say it doesn't really live up to the hype it received, but considering it only cost $40,000 to make and brought in $140m in America and £15m in the U.K. then I think we can forgive the hype.

If you're wondering if its scary, then I've got the perfect benchmark for you. I received my copy and watched it about a week before its U.K. cinema release. A friend of mine was going to see it when it was released. I asked her what the scariest film she'd ever seen was...."The Hand That Rocks The Cradle" was the rather unexpected reply. What did she make of "Blair Witch"? She wasn't really scared at all. And that basically sums things up...The Americans seem to mistake being scared for being in suspense, and suspense is the films strongest point, because you never really see anything to be scared of.

Picture quality is poor, but considering the cost and the fact that the entire film was shot in HI-8, we can forgive this. It should also be noted that some of the film is in black and white, for suspense of course! Sound quality is equally poor, and is in analogue stereo only...Again this is certainly down to the budget.

Special note should go to the extras, which are superb and plentiful, with some very nice animated menus. Take note, though that the chapters are only split on a day/night basis over the film and not on the usual scene basis.

So to sum up, a bit of a let-down but I can't really criticize it too much due to the excellent extras and the fact that films like Wild Wild West cost a fortune to make, and do sod all at the box office!

Harry Potter and the Deathly Hallows (2011)