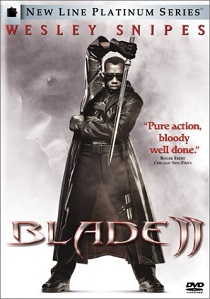 A mutation has occurred in the Prague vampire community and new and fearsome vampire, The Reaper, has been born. The Reaper is not only feeding on the human population but also on the vampires in the city. It is a problem that so worries the mysterious vampire Shadow Council that they have decided to do the unthinkable and approach Blade for his help.

When Blade is summoned to the Shadow Council he is naturally suspicious and goes well prepared. After all, they've tried to kill him for years and now they are asking for his help. When the council explains the dire situation with the Reapers, and the fact it will become near impossible to kill them, he and his team decide to help and lead a team vampires called the Bloodpack.

The Bloodpack are an elite team of vampire warriors who were initially trained to hunt down and destroy Blade. Now their extensive combat skills are going to be put to the test against the Reapers. With emotions running high between Blade and the rest of the group it is going to hard keeping their minds focused on the job in hand.

With this being a film based on vampires there is not going to be a lot of light on offer. And indeed this is true with most of the film at night and in dark warehouses or dingy sewers. Fortunately, the picture is near perfect with a superb level of colour detail with the ever nasty problems of red colour bleeding handled with perfection.

The bit-rate remains high throughout the film and there's never a hind of any picture imperfections from either edge enhancements or general graininess. The picture is so clear and precise it actually shows up some of the special effects to a point of them being rather distracting and, in some cases, laughable. However, I suspect that this was a simple case of there being a limited budget for the CGI special effects.

The sound is wonderfully presented with either a Dolby Digital EX or DTS-ES soundtrack to choose from. Both soundtracks offer some excellent atmospheric and surround effects as well as a near continuous thumping musical score which causes the subwoofer to groan with complaints as it shakes your room. Together with the precisely directed dialogue it really is a joy to behold.

Even with this high octane soundtrack the smallest amount of detail is still clearly audible at all times. With the precise separation offered by the DTS soundtrack over its Dolby rival it is the overall winner. It is truly remarkable and a credit to the films director Guillermo Del Toro.

The menu is reasonably presented and scored in Dolby Digital. However, once the introduction has completed all it goes silent until you return from a sub menu when it all burst into life again. The main menu has cut scenes from the film running in the background and, naturally, there's plenty of blood on show. It's certainly not as well presented as the first Blade film with its excellent parallax scrolling.

There's more extras on offer than you could shake a blooded stake at, and so much so that they are on their own disc. As with Blades first outing, the first disc contains two audio commentaries including one from the man himself, Wesley Snipes, and one from director Guillermo Del Toro and the producer Peter Frankfurt. This is certainly one of the better audio commentaries around today as the pair have a great time explaining the film. The pair certainly love what DVD can offer.

There are also eight documentaries that run for over 80 minutes which take you behind the scenes of the film with various interviews and techniques used in the making of the film. It also includes some seamless branching sub-documentaries in a similar manner to the Matrix. When you see the blood symbol, hit the 'Enter' to access the additional information. If you can't be bothered with that then these branches can be selected from the menu.

There's also 16 deleted scenes, which the director fondly labels as crap, running for nearly 25 minutes. Although there's nothing really special about these scenes, with most of them trimmed for time, they are made all the more interesting by listening to the enthusiastic director's commentary. He even manages to spend most of the time looking forward to the final scene in a peak show booth which was deleted due to a number of reactions from the ladies.

Although the storyline is a little on the poor side, and the action scenes too much like the Matrix for some, it is still a hoot to watch with some great action sequences, special effects and make-up. If you want to go behind the scenes of a film, or already own the original film you'll be sure to buy this title. Just make sure you stock up with plenty of holy water and silver bullets.