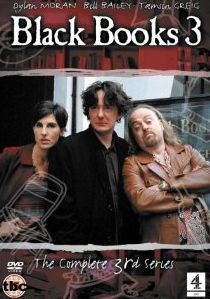 ReviewTV SeriesComedyDylan Moran
Review Article Go back to homepage
Bernard Black returns for another series as the owner of Black Books. Being as grumpy as ever, will Manny finally manage to leave the shop for good?
Dylan Moran, Bill Bailey, Tamsin Greig
Comedy, Television
2
2 Hours 27 Minutes
Thank you for supporting DVD365.net when you order using the link(s) below.
Buy DVD
Story

Bernard Black is a booze hound and a bit of a slob. He runs his own bookshop selling both new and used books and hates his customers with a passion and nothing pleases him more than ejecting those annoying little people from his shop. His shop is one of those little grubby and damp smelling book shops you'll find in a quaint tourist area where loud mouthed American tourists hunt for anything to do with Shakespeare (or this series case, Tanks). His only friends are drink and, if he can call them such, Manny and Fran.

Manny Bianco is Bernard's hairy assistant and pretty much all round slave. Without him Black Books would have surely gone out of business. But it's not as if Manny really wanted to venture into the book business, but his stressed out office job and a chance meeting with a Bernard during one of his heavier drinking sessions found him working at the book store. Bernard's intolerable moods and demands cause Manny to resign on a regular basis, but he always finds his way back to the shop the following day. But when rival book store Goliath Books opens next door, Manny finds it one temptation too far.

Fran Katzenjammer use to own the gift shop next door and her presence in Bernard's shop often causes a rift in the karma. Although Fran more than competes with Bernard in the crazy stakes, she at least craves some sort of social life, even if her best efforts normally end up in ritual humiliation from Bernard. But with her business no more, Fran has plenty of time to assist Bernard in the consumption of large amounts alcohol and cigarettes.

The picture quality is reasonable enough with a good level of detail throughout with no signs of artifacting or outlining. Previous seasons tended to suffer from problems with grain, but that's not an issue here. Funds for this production must have been increased and as a result so has the overall picture quality. Perhaps with the ever decreasing prices of digital video equipment Channel 4 recorded the series using HD equipment.

As a terrestrial television broadcast there is never going to be anything fancy about the sound. But to be honest, it doesn't need one. Never the less, the 256Kpbs Stereo 2.0 soundtrack is more than sufficient for its needs and contains clear and precise dialogue throughout. There is a laughter track but it remains at a level which isn't too intrusive or annoying. Still, it may have been nice to have had an optional laughter track

Extras wise, things are a little disappointing and are not a patch on the previous series. Although the menu system is still animated and scored, it is not a good as Season two whilst some of the menus can be a little hard to navigate through with certain menu options hard to pick out from the background image.

The biggest omission for series three are the episode audio commentaries, and without these the extras do look a little of the weak side. Still, the ten minutes of Outtakes is funny enough with plenty of problems with the props and fluffed lines (you can even see and hear Annette Crosbie swearing like a trooper too!). Outtakes on DVD can sometimes be boring, but not with Black Books. Next up are the Deleted Scenes. Running at just over 20 minutes, and without any audio commentaries, there is no real hint at just why they were removed. I suspect there were running time issues but, on the whole, most of the scenes weren't that funny either. Still, it's nice to see them included here.

Where would a Black Books DVD be without a completely wacky extra? Series two had the outrageous Black Dolls sketch (the dolls make a "guest appearance" in one of the episodes in this series) whilst this series has a rather brief Bernard's Letter sketch where Bernard replies to a publisher's rejection letter in a manner that only Bernard could manage. Whilst it's funny enough, it does seem to have a strange filler material aroma to it and it's far too short. Speaking of filler material, things are rounded off with Channel 4 trailers for the series and photograph gallery

As with the previous two series, Channel 4 have managed to come up trumps with a home grown BAFTA award winning comedy to challenge them all. A successful comedy series can eventually suffer from the writers trying to be too funny (Friends is a prime example of this), but with Black Books things just keep getting funnier and funnier. Writers Dylan Moran, Kevin Cecil and Andy Riley are on top form here and things are really looking up for series four. Bring it on.

So if you enjoyed Spaced, and Father Ted has you in stitches, then you're can't really go wrong with this strange blend of the two. If you like your comedy to be surreal, or have often wondered about that strange thing called "the British sense of humour", then you can't go wrong with Black Books. It's just a pity that the extras in this series take a step backwards from series two.