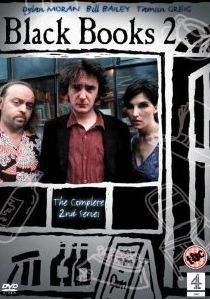 ReviewTV SeriesComedyDylan Moran
Review Article Go back to homepage
Bernard Black is the owner of Black Books. Trouble is, he has one major draw back when it comes to running a shop - he hates people, especially his customers!
Dylan Moran, Bill Bailey, Tamsin Greig
Comedy, Television
2
2 Hours 24 Minutes
Buy DVD
Story

Bernard Black is a booze hound. He also runs his own bookshop selling both new and used book. It's one of those grubby and damp smelling book shops you find a the back of the town in the low rent area or in quaint tourist areas where loud mouthed American tourists hunt for anything to do with Shakespeare. Trouble is, Bernard is not the best shop keeper in the world as he hates people with a passion. And there's nothing like a customer to really spoil his day and totally cheese him off. His only friends are drink and, if he can call them such, Manny and Fran.

Manny Bianco is Bernard's hairy assistant. Without him Black Books would have surely gone out of business. But it's not as if Manny really wanted to venture into the book business, but his stressed out office job and a chance meeting with a Bernard during one of his heavier drinking sessions found him working at the book store. Although Bernard remembered nothing about his job offer he begrudgingly sticks with Manny and as often as his intolerable moods cause Manny to resign he always finds his way back to the shop the following day. Manny is the karma to Bernard's otherwise insane world.

Fran Katzenjammer use to own the gift shop next door and her presence in the shop causes both Bernard's and Manny's hormones to rage. Although Fran more than competes with Bernard in the crazy stakes, she at least craves some sort of social life and boyfriend, even if her best efforts usually end up in ritual humiliation. But with her business no more, Fran has more time on her hands to explore her inner self and ably assist Bernard in the consumption of large amounts alcohol.

The picture quality is a bit of a mixed bag really. Whilst is is of a reasonable quality, with an above average bit-rate throughout and with no problems with artifacting or outlining, I was still expecting something much better than what has been produced for this DVD. Ok, so it's a widescreen presentation and it's slightly better than the television broadcast, but it's still rather washed out and devoid of any real colour depth. Part of the problem could be the studio setting and brighter lighting, especially since the exterior scenes are much better, but I also suspect that the budget played a big part in it to.

Because Black Books is a standard sitcom broadcast on terrestrial television all that is provided here is the standard stereo soundtrack. Never the less, the dialogue is clear and precise and other than that there's nothing of any real note to report.

After getting past the trailer for other Channel 4 comedy series the main menu is pleasantly animated and scored with a strange, but imaginatively created, montage of weird face pulling and slapstick from the series. From the main menu you can then either play all or select an individual episode or access the extras features menu which contains another montage of clips from the series.

Fans of the series are going to be very pleased with extras. As with the first series, each episode is accompanied with a commentary from the cast. Whilst it's not one the most informative audio tracks you'll come across it is still well worth a listen as they all have a good laugh as they ramble their way through each episode.

Whilst certain outtakes sections can be as funny as a kidney stone, the 11 minutes of outtakes are just hilarious (especially the problems with the post-it notes) and it's also just as easy to see how much fun the cast were having during filming. Next up is a rather bizarre, but not particularly out of place for the series, 5 minute Black Dolls feature where the three cast members voice a couple of rag dolls as they venture to the outside world. Definitely one to watch after a visit to the pub.

Although touted as a Photo Gallery this extra is in fact around a minutes worth of pictures presented as a slide show. Some pictures are behind the scenes clips whilst others appear to be just from the series. Not that interesting really. Things are all rounded off with the trailer, although it appears to be the trailer for series one.

Yet again Channel 4 comes up with another home grown comedy to challenge them all. If you enjoyed Spaced and Father Ted has you in stitches, then you're sure to enjoy this series which is a strange and warped cross between the two. Father Ted still has the edge over this series, and to be honest the fresher first series is slightly better than the second, but if you like your comedy to be surreal, or have often wondered about the strange British sense of humour, then you can't go wrong with Black Books.