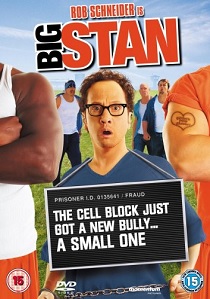 ReviewComedy
Review Article Go back to homepage
Stan, a two-bit con man, is being sent to prison for fraud and the prospect of unwanted male attention terrifies him so he seeks help from a mysterious martial arts guru known only as The Master.
Rob Schneider, Jennifer Morrison, David Carradine, Buddy Lewis, Scott Wilson, Federico Dordei, Kevin Gage
Comedy
2
1 Hour 29 Minutes
Thank you for supporting DVD365.net when you order using the link(s) below.
Buy DVD
Story

Real estate con artist Stan Minton, or Big Stan to his friends, panics when he learns that he's going to prison for his latest property scam. With six months before his three year sentence begins, Stan's deep fear of being fresh jailbait prime for a bit of male rape leads him to take some extraordinary precautions - including getting a number of tattoos (including one on a rather delicate spot) and getting his dippy girlfriend to prepare him for what could be in store for him when he bends down to pick up the soap.

In an attempt to build up his muscles he goes to the local karate teacher but, trying to jump ahead in the training, he is thrown out of the class. However, all is not lost, as the mysterious guru only known as "The Master" turns up and offers his services. With some rather strange training methods, Stan is soon turned into a martial-arts expert that even Bruce Lee would have trouble defeating. Needless to say, with rippling muscles and a lethal karate chop on call at all times, Stan won't be getting violated without a fight.

Arriving at prison for his stint behind bars, Stan quickly uses his newfound skills to intimidate his fellow prisoners and keep them well away from him - either to hate him or love him - in the showers. He soon gains their respect and eventually becomes their leader, bringing an unexpected peace and harmony to the prison yard without the threat of rape. But the corrupt warden has plans to turn the prison into prime real estate and all he needs is a dodgy real estate agent to assist. Does that sound like anyone we know?

For such a recent theatrical release (assuming it actually got a showing there!) there should be no excuse for a poor DVD transfer. Fortunately, there are no such problems with what is a good quality print with an average bit-rate - although there can be an issue with grain. Given the many bright outdoor scenes, the colours are rich and vibrant, perhaps too much at times - especially when there's plenty of red on show. There's also a good level of detail on offer whilst the night time and the numerous interior scenes offer some excellent black levels with no signs of artifacting or outlining. All in all, it's a good performance from a low budget film.

Given the nature of Big Stan the 448 Kbps Dolby Digital 5.1 soundtrack is never going to be anything special. Never the less, it's good enough for this film with dialogue which is firmly fixed in the centre channel whilst there's some good stereo steerage in the front channels. However, apart from the occasional peep from the soundtrack, I failed to notice any real effects in the rear channels or any LFE effects from the subwoofer. Still, this is hardly an action film with massive explosions and CGI effects, so it's nothing to get worked up about.

Before we get to the menu there's a number of trailers for National Lampoon Cattle Call, Superhero Movie and the rather disturbing looking Teeth. Still, that's not all, as there's still an advert for a popular brand of coloured sweets too - although you can skip through these to the static, but scored, menu. Unfortunately, that is where things end as there's no extras whatsoever with only the standard scene selection facility and subtitles available. It's a pity really as with this being Rob Schneider's directorial debut you would have thought there'd be a bit more of an effort. Still, with a meagre film budget, it's hardly surprisingly that the DVD budget didn't add up to much either.

Given the Rob Schneider is not known for his serious acting abilities and that most of his films are rather bizarre affairs and/or of a slapstick nature that come in bottom of the box office takings, it's no surprise to discover that in the UK Big Stan went straight to DVD. Following in the footsteps of fellow comedians, such as the likes of Ben Stiller with yet more bizarre comedy, this is a film that truly shouldn't work. However, in so many weird ways that can't be explained, it's actually a rather funny film to watch.

When the review disc popped through my letter box I was ready with sharpened pencil to write one of the most scathing reviews I'd even had the displeasure to write. However, upon sitting down to watch Big Stan with my girlfriend, we couldn't help but laugh at some of his mad antics and one liners. Sure, there's references to nearly every jail film you can think of, but the jokes come thick and fast with jail rape topping the joke chart. Needless to say, it's probably not the best film to watch if you're easily offended by such things.

Given that there's no extras it's hard to truly recommend this as a purchase. Never the less, should you fancy a gamble on a rental title, then you couldn't do much worse than giving Big Stan a spin. In fact, it may even warm you to some of Rob Schneider's other films - such as the Deuce Bigalow and The Hot Chick. But then again, I don't want to overstep the mark.