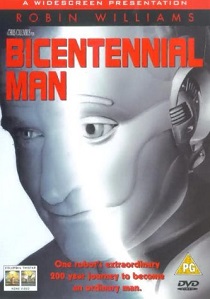 Andrew, so named by "Little Miss" has two modes, "personality" or "no personality", and when he offers the option to turn on his personality chip to Richard Martin, it is declined. So Andrew goes about his day to day life serving the Martin family. One day at the beach, "Little Miss" shows him her favourite glass horse which he promptly accidentally drops and breaks. It is from here that he begins to develop a personality of his own, complete with emotions, he makes her a new horse from driftwood on the beach showing his developing creative side.

As Andrew's life goes on, he sees the people he loves grow old and die spurring him on to create artificial organs to not only prolong human life, but also to make himself more human. This is the crux of the film, Andrew's constant attempts to become human and be accepted as a human.

The critics savaged this film.... What is wrong with these people? So many films waste their huge budgets and become self-made turkeys (Battlefield Earth, Wild Wild West anyone?), this film spent what looks like a sizable budget on the special effects, which I have to say are excellent with Williams' robot makeup being particularly impressive, but unlike the aforementioned examples this film has a great story and unusually, a heart. It can take you from a lump in the throat to laughter in the blink of an eye, a tremendous achievement. Certainly the humour is very well placed with Williams on top form, the insults against Portia's intended are very funny.

Picture quality is in general good, there were no visible signs of artifacting or outlining and the colours were bright and vibrant. The bit-rate was also above average, the second review in a row where this reviewer has had the pleasure of adding this to his review (Mission: Impossible being the other).

Sound is nice and clear, the surround channels are not overused but this is in keeping with the nature of the film, to have surround blasted from all over the place could have ruined the ambience created so well.

Extras are okay, the featurette is a bit on the short side and seems to just cut-off at the end, but its better than nothing.

To sum up, I really liked this film. I am not normally a fan of Robin Williams, but here, he puts in a superb performance which at the end of the film, leaves you feeling that you've just seen a great film and wondering where the last 2 hours have gone.