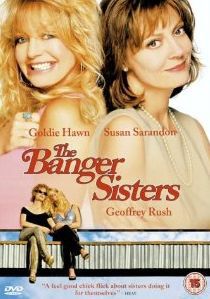 Suzette is an ex -groupie who spends her days working in the same bar she frequented during her groupie days, partying hard and reminiscing about the past. But her younger boss has got fed up with her reminiscing and decides its time to let her go. With no money to fall back on Suzette decides to look up her old friend, and fellow groupie, Vinnie in the hope that she can help offer her some help, support and a good party.

Suzette packs what little belongings she got and heads to Phoenix. When her fuel runs out, and with no way of paying for more, she picks up an uptight, depressed and celibate writer called Harry who is on a bizarre mission to write a book and shoot his father. After dropping Harry off at his hotel Suzette heads over to Vinnie's house only to discover that she has been transformed from trendy rock goddess to a prim, beige-wearing suburban wife with a respectable lawyer husband.

The arrival of Suzette back into Vinnie's life throws her carefully organised life into chaos. Her daughters and husband knew nothing of her wild past and Vinnie is soon having to answer some increasingly tricky questions about her past. Suzette's infectious humour and lust for life is also starting to have an effect on Harry and he's finding himself writing his best material in years. Now all Suzette has to deal with is Vinnie. However, Suzette need not have worried as Vinnie soon longs for a return to their care free spirited days.

Twentieth Century Fox have a habit of producing the goods when it comes to their DVD releases and, yet again, they receive top marks for the quality of the picture reproduction. The colours are rich and vibrant with a high level of detail and a sharpness which video could only ever dream of. Mind you, that's not saying the picture is perfect. There are a few occasions where outlining is a bit of a problem and the picture has a number of dust scratches, although they are only really visible in wide shots. Never the less, it's a good all round performance.

With the film being based on two ex-groupies I was hoping that there was going to be something special in the soundtrack department. Fortunately, I was not let down as the musical score is an absolute cracker. Whenever the music starts the entire soundstage becomes swathed in sound and the bass heavy soundtrack, which I assume has been enhanced somewhat, causes the sub-woofer to rumble into life. Away from the musical score the dialogue remains crisp and clear at all times and to top it all off there's plenty of ambient surround effects.

Whilst both the picture and sound are above expectations, the extras are a bit on the poor side. The audio commentary is interesting enough, with some detailed and interesting insights into the film, but the HBO making of featurette is nothing but a "pat on the back" exercise with everyone saying how much of a joy it is to work with who ever. I really am starting to treat these HBO documentaries with the pinch of the salt they deserve. Proceedings are rounded off with a rather amusing and well presented gag reel.

I'd heard quite a few mixed opinions about this film so I was a little apprehensive and ready to write a scathing review. However, yet again, it goes to prove that you should ignore film critics as The Banger Sisters is surprisingly enjoyable and I found it quite hard to understand why this light hearted comedy warranted so much criticism, especially when you consider that both Goldie Hawn and Geoffrey Rush put in a fine performance and play off each other so well.

It's also hard to believe that Goldie Hawn is touching 60 years old. She looks as stunning as ever and a woman of her age shouldn't be running around in low cut tops and tight fitting pants. Quite how she manages to stay in shape is beyond me. If you look back in time to films such as Private Benjamin and Overboard you'll soon discover that she's hardly aged a day. Is she cryogenically frozen in between film shoots or has the surgeon been at work?

I expect that this film is aimed at a thirty-something audience so I suspect that it may not appeal to many teenagers, especially when it makes you think that your parents were young once and got up to plenty of naughty things. Never the less, if you can't bring yourself to make a purchase then you should seriously consider a rental, if only for the look at the blooper real.