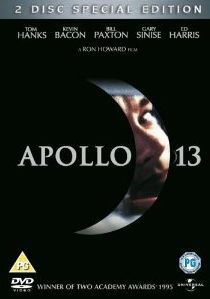 ReviewScience FictionDramaThrillerTom Hanks
Review Article Go back to homepage
It had been less than a year since man first walked on the moon, but as far as the American public was concerned, Apollo 13 was just another 'routine' space flight - until these words pierced the immense void of space: 'Houston, we have a problem.'
Tom Hanks, Kevin Bacon, Bill Paxton, Gary Sinise, Ed Harris, Kathleen Quinlan
Suspense/Thriller, Science Fiction, Drama
2, 4
2 Hours 20 Minutes
Thank you for supporting DVD365.net when you order using the link(s) below.
Buy DVD
Story

There's party at NASA astronaut Jim Lovell's home where they are all watching Neil Armstrong on television making history with his "one small step". At this time, Lovell and his crew are slated to go on Apollo 14 in about 18 months time. Lovell has already been to the moon and back in Apollo 8, when the first manned orbit of the moon took place, and he's keen to take a walk on the moon. His chance comes sooner than he hoped when an ear infection to the commander of the Apollo 13 mission has Lovell and his crew members bumped up to crew the Apollo 13 mission.

However, two days before launch, backup Lunar Module pilot Charlie Duke is diagnosed with German measles, and as command module pilot Ken Mattingly has not had the measles, he is substituted for his backup, Jack Swigert. Although there is some concern that they haven't trained together the mission gets the nod and after a fairly uneventful launch and first stage separation, the crew settles into its daily routine, including a television report for the rather disinterested Americans back home who are more interested in a baseball match.

Upon conclusion of the television transmission, the crew are requested to perform the routine stirring their oxygen cryo-tanks. Swigert flicks the relevant switches and the tank stirring begins. However, a short in one of the oxygen tanks triggers an explosion, damaging the remaining oxygen tank leaving the crew stranded 205,000 miles from Earth in a crippled spacecraft as they call "Houston, we have a problem". The ground crew at Mission Control including astronaut Ken Mattingly and flight director Gene Kranz race against time and odds to bring them home.

The transfer is simply stunning with some wonderful detail, textures, colour tones and a blackness which, when given a spotless transfer such as this, truly highlights just what is possible with the DVD medium. Given that the film is set in space, with plenty of CGI and trusty models, the blackness of space, the distant stars and the wonderful images of the moon and earth look absolutely fantastic. The transfer is near pixel perfect with no signs of either grain, outlining or pixelisation, whilst the black levels are extremely solid throughout. The print is also near perfect with no problems with dust specks or other damage. Definitely a title for impressing your mates with.

Whilst Apollo 13 was previously available in either DTS or Dolby Digital versions, this special edition has managed to squeeze both a 768 Kbps DTS and 384 Kbps Dolby Digital soundtrack onto a single disc. Whilst the Dolby Digital quality has been compromised somewhat, with a much more compressed soundtrack than normal, given the amount of compression required to accommodate it on the disc it still manages to impress. Never the less, the out right winner has to be the awesome, and demonstration standard, DTS soundtrack which is so good you could almost be in the fated capsule yourself.

Still, the Dolby Digital soundtrack is certainly no slouch and both supply a fantastic set of ambient effects in the surround channels whilst the dramatic dialogue is firmly locked into the centre channels. Even the much maligned LFE channel is put to some good use, and during the launch scenes you'll soon find your room shaking its foundations as the rocket blasts off into space. Still, the more spatial DTS soundtrack is on top form and if you don't own an DTS equipped system then this is the film to make you want one.

Given that there's plenty of extras accompanying this release it made perfect sense to farm these out onto their own disc, leaving the main disc to concentrate on what matters the most - The sound and picture. The main menus on both discs are pleasantly scored and animated with various cut scenes from the movie. Although subsequent menus are static and silent, with very little on them, everything is laid out simply and clearly. It's all very simple, but it's also extremely effective at getting across the subject matter.

Extras wise, Apollo and space fans in general will discover that there's an excellent selection available. First off, the feature disc contains two interesting audio commentaries from director Ron Howard and, in a bit of an amazing coup, real life Apollo 13 astronaut Jim Lovell and his wife Marian. The track from director Howard provides plenty of technical detail about the cast, the special effects and production information including the large amount of input from Tom Hanks. Given that he praises Hanks throughout the film it would have been even better if the man himself had been brought kicking and screaming into the recording studio.

However, the jewel in the commentary crown is the audio track from Apollo 13 astronaut Jim Lovell and his wife Marian. Whilst Ron Howard can provide useful information on the film and it's many technical aspects, there's no better way of providing a proper account of what happened during the mission by getting the information straight from the horse's mouth.

On the whole Jim Lovell is very impressed with the technical aspects of the film, although he does occasionally point out the odd inaccuracy and artistic license. But, along with his reminiscing, it is Jim's actual technical detail of the mission that makes this commentary so well worth a listen. Even Marian provides an interesting angle on the unfolding drama and she understandably chokes with emotional during the launch sequence and other moments in the film. Still, the majority on the commentary is provided by Jim and Marian tends to take a back seat (she's probably just as interested as I was). Even though this commentary was provided on the original release it still manages to make it the major selling point for this release.

Fans of the Apollo missions and the space programme in general will be quite impressed with the documentaries and background information on the second disc. Running at just under a hour, the rather interesting The Lost Moon : The Triumph of Apollo 13 featurette looks at the making of the film, including the cast and crew trip in the "vomit comet" zero-g simulator, and features interviews with the cast, crew and real-life members of the fated mission. From the special effects to the set designs it's interesting to discover that even the NASA guys were impressed with the technical accuracy and it's a real credit to director Ron Howard and his team.

Although not strictly related to the film, but never the less interesting, the forty five minute featurette Conquering Space: The Moon and Beyond looks at the many highs and lows of the last forty five years in space. The twelve minute Lucky 13 : The Astronauts' Story featurette has members of mission control and the crew recounting the real-life events of the Apollo 13 mission. Although it's a bit on the short side, it is still an interesting featurette worth watching. Things are rounded off nicely with the theatrical trailer.

This special edition is a fitting tribute to all astronauts, past, present and future. It's not only a brilliantly presented package, with a DTS soundtrack to finally do the film justice, but director Ron Howard has produced a jewel of a film to highlight mankind's ingenuity and our relentless pursuit of acquiring knowledge of the universe. It's an emotional ride of a film and if you own the original release then it's still worth your while throwing it away and getting your hands on this edition. Apollo 13 is superb family entertainment and it finally comes with plenty of facts and figures to give space fans all the information they need.

Finally, it's worth while remembering that the computer processing power which sent man to the moon is routinely used by your washing machine. Even your digital watch has the potential to being more powerful than the lunar rockets. And if that's forty years of technological progress for you then the future of manned exploration of our galaxy is going to be one heck of a ride. I just hope I live to see it.