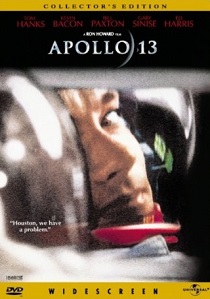 ReviewScience FictionDramaThrillerTom Hanks
Review Article Go back to homepage
"It had been less than a year since man first walked on the moon, but as far as the American public was concerned, Apollo 13 was just another 'routine' space flight - until these words pierced the immense void of space: 'Houston, we have a problem.'"
Tom Hanks, Kevin Bacon, Bill Paxton, Gary Sinise, Ed Harris, Kathleen Quinlan
Suspense/Thriller, Science Fiction, Drama
1
2 Hours 20 Minutes
Buy DVD
Story

The opening sequence shows some archive NASA footage (or is it?) of the tragic Apollo 1 accident in which Gus Grissom, Ed White and Roger Chaffee were killed in a fire on the launch pad during a countdown rehearsal. This is narrated by Walter Cronkeit in his inimitable style.

There's party at the Lovell's home, where they are all watching Neil Armstrong on television making history with his "one small step". At this time, Lovell and his crew are slated to go on Apollo 14 in about 18 months. Lovell has already been to the moon and back in Apollo 8, when the first manned orbit of the moon took place.

Due to an ear infection of the commander of Apollo 13, Lovell and his crew are bumped up to prime crew on Apollo 13. Two days before launch, however, backup Lunar Module pilot Charlie Duke is diagnosed to have the German measles, and as command module pilot Ken Mattingly has not had the measles, he is substituted for his backup, Jack Swigert.

We now have the launch sequence, and it really looks like NASA footage, but every bit has been created especially for the film - a real credit to the special effects guys! After a fairly uneventful launch and first stage separation, the crew settles into its daily routine, including a television report for the folks back home.

Upon conclusion of the television transmission, the crew are requested to stir their cryo-tanks (Fuel). Swigert flicks the relevant switches, and the tank stirring begins. A short in one of the oxygen tanks triggers an explosion, damaging the remaining oxygen tank. Apollo 13's infamous problems have just begun!

The crew must evacuate to the Lunar Exploration Module (LEM), but this was only designed to hold two crew, and is a very fragile craft. Also, powering down the Command Module's (CM) systems to conserve power might leave them completely unable to return to Earth...

The computer on board the command module also has to be shut down in order to conserve energy. This is done so fast that all the relevant calculations to transfer navigation to the LEM computer has not been completed when the CM computer is shut down. The carbon dioxide levels in the spacecraft begin to rise to dangerous levels, and a jury-rigged 'mail-box' device has to be built to fit the square CM Carbon dioxide scrubbers into the round holes in the LEM. This results in the Carbon Dioxide levels returning to a normal level within a very short time.

Meanwhile, back on Earth, Ken Mattingly is busy trying to develop ways of restarting the CM computer systems without drawing too much power from the drained batteries on board the spacecraft. A manually-controlled engine burn has to be performed from the LEM in order to get back into the correct Earth re-entry orbit. This is an exciting moment, with the background music being used to good effect.

During their eventual re-entry, because the angle of re-entry is so shallow, the spacecraft is out of communication for longer than the normal three minutes. The whole world is watching and waiting for any communication from the spacecraft. When the call is eventually heard, the Mission Controllers in Houston all cheer, and Maralyn and the rest of the family are extremely relieved. (to say the least!)

A short narrated epilogue is spoken by Tom Hanks, explaining what the three astronauts have done since the space flight. This is spoken over the scenes of the three astronauts being welcomed on board the rescue ship. This movie is real edge-of-the-seat stuff, even though I remember a lot of the incidents, and everyone knows that the crew returns home safely.

Despite its comparative lack of extras, I still feel that this film is a 'must' for anyone even slightly interested in manned space flight. Being a child of the Apollo era I might be a little biased here, but what the heck, this is a subjective review anyway! All the main actors and actresses in this file have really captured the mood well. They are believable and you can really feel the anguish Maralyn Lovell is going through, when she fears that she may never see her husband again.

I also liked the fact that Jim Lovell and his wife Maralyn are both featured as 'extras' in the film. Jim Lovell is the Captain on board the recovery aircraft carrier, and his wife, Maralyn is an extra in the launch sequence, just in front of Kathleen Quinlan (Maralyn in the movie).

A royal woman living in rural Russia during the 18th century is forced to choose between her own personal happiness and the future of Russia, when she marries an Emperor in The Great: Season 1, released on DVD 8th March 2021 from Paramount Home Entertainment.