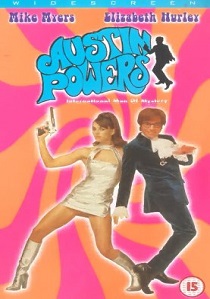 ReviewComedyCrime
Review Article Go back to homepage
What does the worlds best secret agent do when he defeats an arch-nemesis who becomes frozen in space? Why, you freeze yourself and wait for that nemesis to return to earth. That was over thirty years ago and guess who's just returned...
Mike Myers, Elizabeth Hurley, Michael York, Mimi Rogers, Robert Wagner, Seth Green, Fabiana Udenio, Mindy Sterling, Paul Dillon, Will Ferrell
Comedy, Crime
2
1 Hour 31 Minutes
Thank you for supporting DVD365.net when you order using the link(s) below.
Buy DVD
Story

Austin Powers is a super spy, and as spies tend to be, manic womaniser, living in the 1960's who spends most of his waking moments battling his arch-nemesis Dr. Evil. Finally, Austin manages to defeat his nemesis, but not before Dr. Evil launches himself into space where he is cryogenically frozen and vows to return and hatch an evil plot to take over the planet.

Fearing for the future of the planet, Austin decides it is best for him to be frozen so he can once again battle Dr. Evil when he returns. For thirty years he remained frozen whilst the world around him changed from the swinging sixties, fuel crisis seventies, cold war eighties and pretty much boring nineties.

Dr. Evil has returned to earth and brought his evil, but somewhat aged, gang back together and sets off from where he left off by stealing a nuclear weapon and holding the earth to ransom. However, things have changed a great deal from the swinging sixties and both Dr. Evil and Austin Powers need to adjust to their new time period whilst doing battle once more.

Picture quality is above average, but nothing special. There is no artifacting to speak of and the transfer is generally a good one. It just seems to be lacking that little something to make it stand out from the crowd. Sound wise things are fairly indifferent, there's only so much you can use surround channels for in a film like this.

Funny, funny, funny... Right from the silly dance routine at the beginning of the film you know you're in for some laughs. There's everything from flatulence jokes to sexual innuendo, basically everything from Mike Myers joke book is used. One of the funniest moments that sticks in the mind is the "Swedish penis enlarger" incident which Austin so rigorously tries to deny is his, despite a guarantee, receipt and a book entitled "Swedish penis enlargers and me - By Austin Powers".

There are also some extremely well thought out comedy moments with a very clever version of the balloon dance with sausages (yes, I know) and bottles of champagne. Austin powers is played brilliantly by Mike Myers, but it is another Mike Myers character, Dr. Evil that steals the show (I wonder if he got paid twice?). Its the way he is so out of touch just like Powers which gets the laughs, things like demanding a million dollars for ransoming the world, nothing these days.

There are so many things in this film to recommend it. If you love toilet humour and stupid jokes then this film is just your bag baby!