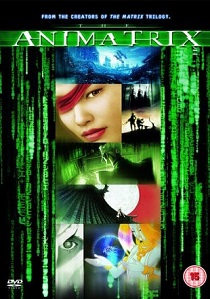 The Animatrix is a set of animated short stories set in the world of the Matrix. They have been commissioned by the Wachowski brothers in order to help explain their universe and to promote the Matrix Reloaded and Matrix Revolutions films. The shorts have been brought to the screen by some of the most influential anime directors in the business. Each short is as different as the next and they encompass a variety of animation styles varying from extremely impressive CGI to a more traditional style of Japanese anime.

The shorts are described in more detail below:-

The Final Flight Of The Osiris The crew of the Osiris must get a vital message back to Zion warning of an impending attack. However, the crew must enter the Matrix whilst dealing with the small matter of over 250,000 Sentinels. The Second Renaissance - Parts I and II: Welcome to the Zion archives and the history of the Matrix. See how it all starts when man invents A.I and puts the machines to work only for them to finally rebel when man threatens their existence.

Kid's Story Sitting in a school classroom, a kid gets an invitation from Neo to escape the Matrix. However, agents are already hot on his tail and finding his way out of the Matrix quickly turns into fight between life and death. Program: During a Samurai training program a trainee soldier is forced to choose between love and her colleagues in the real world. Is this all part of the test, or is there something more sinister at work?

World Record Through the extreme concentration and exertion required to compete in a race, a world record breaking sprinter manages to break out of the Matrix and witnesses a glimpse of the real world beyond. However, agents are quickly on hand to ensure that he isn't free for too long. Beyond: In a small town there is a house where everything is not as it seems. It's a place where only the brave dare to visit as weird and inexplicable things happen in and around the long abandoned house. Is it really a haunted house or just a glitch in the Matrix?

A Detective Story A private investigator called Ash is hired to track down the notorious cyber criminal Trinity. However, as his investigations proceed he soon starts to question his surroundings and the identity of his equally mysterious client. Matriculated: A small group of rebels specialise in capturing sententials and then re-programme them via their own version of the Matrix to make them self aware and an ally for the human resistance.

With such a variety of animation on offer it is quite hard to give a true opinion of the overall picture quality. Never the less, each animated short is superbly presented with some rich, vibrant and involving colours which positively shine through on DVD. The is especially so for the amazing CG in The flight of the Osiris and the wildly psychedelic scenes whilst travelling through the Matrix in Matriculated. Each short is as different as the next and as a result the picture presentation varies immensely. However, each and every one is pretty much picture perfect with a high bit rate and no visible signs of pixelisation, outlining or artifacting. It really was a walk in the park for the DVD encoding process.

With the many differing styles of animation, and with the productions originating from different studios, the sound is as diverse as the animation. But what they do have in common is an excellent soundtrack. The surround channels are used to good effect with both the musical score and ambient effects finding their way to the rear of the soundstage whilst the occasional well placed LFE ensures that the subwoofer is kept occupied throughout. The front soundstage is as good as the rear with some good stereo steerage and clear and audible dialogue in the centre channel. Whilst many an active soundtrack can drown out the dialogue, the collection on offer here is perfect. As the output level is fairly consistent throughout, once a comfortable listening level is obtained you can discard the remote and sit back and enjoy the show. The only noticeable between all of the shorts is that some use the surround channels more than others.

The menu system is nicely animated and scored and each episode is easily selectable and there's a welcome edition of a "play all" option. Not only is this a handy feature to have, but it actually shortens the viewing time as the closing credits are only shown at the end of the last short.

Fans of anime are going to be in a near breathless state when it comes to the extras on offer. Not only have you got a trailer for the video game, which looks interesting in itself, but there are a number of audio commentaries to accompany four of the shorts. However, unless you are proficient in Japanese you are unlikely to understand of word of what is going on and you'll need to enable the subtitle feature. The subtitles are not automatically enabled so unless you know what to expect you'll, like me, end up flipping through the audio tracks and getting annoyed when you can't find the English soundtrack. Once you find the subtitles you'll discover a number of interesting facts about the animation process and the ideas behind the films.

Although the Wachowski's are known for their near recluse status, it would have been the real icing on the cake if they'd managed to provide a commentary track. It would have been extremely interesting to discover what goes on in their heads. However, true anime fans are sure to be more interested in the Scrolls to Screen The History and Culture Of Anime featurette. Again, you'll need to enable the subtitles option as you've got a mixture of interviews in English and Japanese. Next up are the seven making of featurettes for each of the shorts, with the highlight being the featurette on The Flight of the Osiris with all of its wonderful computer jiggery-pokery.

I still can't quite figure out the reasoning behind the commissioning of this work. Perhaps the Wachowski brothers are fans of anime or they fancied showing the film in a different light. The brothers wrote four of the animated shorts whilst the remaining three were written by some of the most creative talent in the anime world. However, it has to be said that the best of the shorts are those written by the Wachowski brothers; although it does seem a little strange that this information was not portrayed or discussed in either of the films in more detail. The highlight of the set must be the two part The Second Renaissance which goes some way to explaining the beginnings of the Matrix and the epic battle between man and machine. It's certainly violent in places, especially in one shocking scene where humans are seen to be attacking what appears to be women only for it to be revealed as a machine, whilst in another scene a robot attacks a human with grotesque results. There also appears to be some interesting parallels with the treatment of the Jews and the geographical location of the machine city of 01. The only complaint would have to be the comical design of the worker robots. They would certainly look at home in an episode of Futurama.

The only real reference back to The Matrix Reloaded is the discs first, and extremely impressive CG animated short, The Flight of the Osiris. This is essentially a pre-cursor to the film and a superb bit of computer animation to boot. Owners of the rather disappointing Final Fantasy: The Spirits Within may also notice that there are quite a few animation similarities between the two. Well, that is because the same team, Square Pictures, was also behind this short. The animation and texture mapping is much improved and a sure sign of this is when you find the main female character worryingly attractive. It's a great pity that Square Pictures have ceased to exist as the work they did was quite remarkable.

If you are a fan of the Matrix films then you may be tempted by The Animatrix whilst casual fans could be disappointed, and perhaps even confused. However, if you are a fan of the anime genre then you're going to be in robot heaven. This is especially so when you consider the various audio commentaries, the featurette on the history of anime and the fact that some of the most influential guys in the anime businesses were involved in the project. Whilst The Matrix Reloaded was a disappointment to many, The Animatrix more than makes up for its shortcomings and as a result is highly recommended.