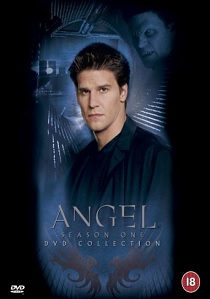 Not familiar? Let me digress... Angel is a 200+ year old Vampire, one of the worst. During his reign of terror he savaged the daughter of a Gypsy family. Furious the family placed a magical curse upon the Vampire, restoring his soul, making him remember each one of the hundreds of victims to his vamperic blood lust.

Angel wanders the land for many years trying to come to terms with his brutal and murderess past. Eventually he turns up in Sunnydale where he falls in love with a beautiful yet potentially deadly Buffy Summers, a Vampire Slayer. The two of them eventually get it on and something terrible happens, it turns out that if Angel has a moment of true happiness then the curse is lifted and he turns evil once more. Buffy and friends manage to restore the Gypsy curse just before Angel is about to destroy the world. Knowing that being near Buffy will eventually destroy them both and possibly everyone else, Angel decides to leave Sunnydale for a new beginning in Los Angeles the City of Angels. Here the handsome hero gets his own series in which he goes around helping people with problems of the Demonic variety.

Angel's mission in Los Angeles is to atone for his 200 years of evil and is aided in his quest by fellow Sunnydale reject Cordellia Chase, a self obsessed wannabe actor and Doyle, a half-demon with an Irish accent who's special gift is a mystical link to 'The Powers That Be' by which he receives visions of people in trouble. And that sets the scene for Angel - Doyle receives a vision and Angel and co. attempt to help the hapless subjects. The series in general is a refreshing departure from Buffy and all those other 'Teen' series, which I hate completely. Although the subject matter in Angel is the same as Buffy, the series seems far more watchable simply because it's a little more grown up.

The plots in Angel are interesting and include impressive script writing and Character portrayals. Some of the stories even have an X-File sort of feel to them, in particular the one about a Doctor who uses his mind to detach and reattach his body parts (his hands and eyes, pervert). The main threat to Angel comes from the law firm Wolfram and Heart in which the senior partners of the firm are powerful demons from another dimension. The rest of the staff are human their just evil lawyers, a nice touch. Many of the episodes have links to the firm and this acts as an ongoing story. The episodes are quite dark in places but this is intertwined with humorous and laugh out loud moments, I kid you not. The series even has slapstick humour in some of its later episodes when the incredibly inept Wesley joins the team (another Buffy cast off who does well here).

The characters in Angel and how they interact is what make things interesting. Firstly you've got the title role, Angel who is dark, depressive and doesn't like interacting with anybody on a social level, mainly because he doesn't have a lot in common with other people. Trapped by his curse, he can never enjoy himself to much as he may turn evil and kill everybody, a fact of which Cordellia constantly reminds him. Also as a vampire Angel will live forever so his sentence is a hefty one.

Doyle on the other hand, although he too has had a fairly dodgy past is a happy go lucky type. He fails to understand Angel's depressive tendencies and tries his best to cheer him up. Eventually he begins to understand the true meaning of Angels mission in Los Angeles. And then you've got Cordellia and Wesley. These two mainly provide the comic elements to the series more so Wesley who's slapstick style humour could have you in stitches. Cordellia is probably the weakest main character here. Played as a typical LA air head who's main concern is fashion, she moves herself into Angels life by becoming his secretary after being rescued by the Vampire.

After such a good box you would expect some pretty good content. Unfortunately they obviously used up their entire budget on the box. For starters, even though the series was filmed in widescreen the episodes are full frame. As far as I am concerned is great as I have a normal TV but I'm sure (much to my enjoyment) this will annoy many of you who insist on watching programs in 'As it was filmed' vision on your fancy schmancy wide screen TV's. Cries. Overall the picture quality is on par with other material originally broadcast on television, even if it does struggle to reproduce the many dark scenes. One thing is for sure, its certainly better than anything video could offer.

The menus are pretty good, although, excluding the intro to the menu there are no moving pictures. There is however a repeating soundtrack and some sharp stills of the cast. As far as DVD's 'Special Features' are concerned the set has quantity but lacks quality. You get your usual 'Chapter Selection' feature… as well as a featurette for Angel and Cordellia, and another one for the Demons. The trouble with these featurettes is that they are too short, and don't really tell you much. Having said that these are probably the best extra in the set. There is also one for the entire series, this ones a little longer, around 9 minutes and consists of the majority of the main cast and crew discussing elements of the show. There's also the obligatory Trailer (yawn) and the Cast Biographies that, considering all they seem to have stared in is some never heard of American daytime TV rubbish, wasn't really worth putting the damn thing on.

Although the series is classed as an 18 Certification this is way of the mark. The reason it got such a high rating is because one of the episodes contains torturous overtones. Having said that most of the disks get a 15 rating, pretty high considering there's no swearing, sex or nudity.

The entire season is presented in a superbly packaged box set. If only more DVD Collections could be this elaborate in their box designs. The set is created in the style of a book (I believe these are the same as the Buffy ones). The first couple of pages describe each episode and then there are six sleeves each containing scratch resistant fabric, for each one of the DVD's. Yes that's right. Scratch resistant fabric, fabric that's scratch resistant, in a DVD box. Makes a welcome change from the usual rough arse plastic cases that discs like to spin around in, doesn't it? Each sleeve tells you which episodes are on the disc and lists each of the chapters. And the entire thing is kitted out with pictures and a rather nice blue colour. To top it all off the Book then slides into a tough laminated cardboard sleeve, and not your '24' style sleeve either. A box set that should look pretty good even after you have decided to take the cellophane off.

This is an excellent series and anybody who has not yet seen it I urge you to give it a go even if you thing the name Angel is a bit puffy. Honestly I thought it was a really good bit of TV. And for those who have seen it? Well if you liked it then get this set. It's one of the best designed out there and seeing as the series will probably never be shown on terrestrial TV at a sensible hour and uncut, this is your only chance of enjoying the full series again.

Special Features
Related Articles
Much Ado About Nothing
Comments
RecommendedView