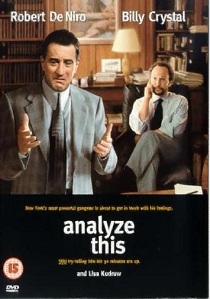 Ben Sobel is a psychiatrist a few days away from his second marriage. Whilst on his way to a party he unfortunately runs in to the back of one of local mobster cars. Naturally, the occupants don't wish to get involved with any insurance claims and dismiss Ben's attempts to give them his insurance details, however he leaves them his business card just incase they change their minds.

Their boss, Paul Vitti, is going through a few emotional problems and as a result is not able to carry out his normal day to day mobster duties. On seeing the business card he decides to pay Ben a visit and makes him an offer which, naturally not wanting to swim with the fishes, can't be refused.

Ben's life is no longer his own as he is interrupted for sessions 24 hours a day, even his own wedding is not safe from interruptions, as Paul attempts to get his life back together ready for a big mobster meeting with various comical incidents along the way.

The picture has only an average bit-rate, but it is sharp with vibrant colours throughout with no signs of artifacting. It is also nice to see that Warner has offered both the widescreen and full screen versions of the film. The film soundtrack hardly calls for the heavy use of the surrounds, with it being mainly dialogue based. However, when the surrounds are used it is mainly by the accompanying jazzy musical soundtrack, gun fire and the usual atmospheric sounds.

There is also a nice audio commentary from Billy Crystal and Robert De Niro which Billy spends most of his time telling us that most of his lines were adlibbed. It is good to see that the producers managed to get both Billy Crystal and Robert De Niro back to provide a commentary, although I expect they were recorded separately, plus there are many prolonged quiet moments. There is also a welcome addition of a selection of outtakes.

This is quite a good comedy in which Billy Crystal doesn't have to break into a sweat to produce his normal character portrayal. Robert De Niro's attempt at comedy does pay off, and his character works well. If you compare his hard man role in Casino, which has deserted his character in this film, he does get most of the laughs.

Although Lisa Kudrow only makes fleeting appearances in the film, I felt that every time she did appear that she stole each and every scene. I do feel that her dippy character in Friends has typecast her somewhat as most of her funny lines could have come straight from the set of Friends.