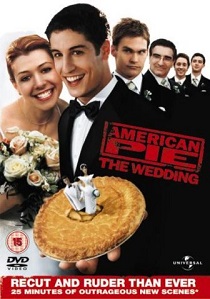 With most of the original gang finding careers and moving on in the world, East Great Falls High, the prom night, band camp and the summer beach party is now just a distant memory. But one thing still hasn't changed. Jim and Michelle are still a couple and their relationship is about to take the next step when Jim decides to pop the question to Michelle in a swanky restaurant. Trouble is, it's clumsily Jim proposing so if anything is going to go wrong you can be rest assured that it will. So it will be no surprise to learn that Jim has forgotten the ring and Michelle is feeling a little amorous under the table. It must have been the oysters.

But there's a much bigger problem than clumsy Jim - Stifler. Although everyone has grown up and matured from their crazy days, Stifler gets cruder and more obscene by the day. As a result, Jim and Michelle are keeping their wedding plans as secret as possible and plan to keep him well away so he can't wreck their special day. But their carefully thought out plans are rumbled when Stifler turns up at Jim's house to find an engagement party in full swing. And wherever Stifler goes chaos is never that far behind and the resulting all important first impression with Michelle's parents, Mary and Harold Flaherty, is hardly something you'd want to remember. But never mind these problems, Stifler has to start arranging the ultimate bachelor party with sexy strippers - something that both Finch and Kevin take an instant interest in. After all, what wedding would be complete without a bachelor party?

But when Michelle's gorgeous sister, Cadence, flies in to be maid of honour both Stifler and Finch begin a battle for her heart. In an attempt to work his way further into the wedding proceedings, Stifler abandons his usual foul mouthed behaviour and opts for a ultimate nice boy approach. Not only does this get him into the Flaherty's good books, enabling him to keep hold of the precious wedding ring, but Cadence is also impressed. This leaves Finch with no other choice but to throw his philosopher ways out of the window and adopt the boy philanderer. As the countdown to the wedding begins, Jim is still desperately trying, and failing, to impress Michelle's parents, Michelle needs a wedding dress and Stifler's bachelor party is just around the corner. Surely nothing else could go wrong for Jim? Don't bet on it.

The transfer picture, especially during some of the darker interior scenes, is quite awful with nearly every scene suffering from some sort of grain or picture noise. Characters also exhibit signs of outlining and at times the colours seem to be over saturated with way too much contrast. You only have to watch the opening restaurant and Stifler dance-off scenes to witness all of these easily avoidable problems. Fortunately, the majority of the daylight scenes manage to pull things back from the brink and provide a much sharper and more vivid picture with a good level of detail. Never the less, for such a recent film the transfer is far from perfect and it suffers from numerous dust scratches and other imperfections.

With the film being mainly dialogue based there is very little need for anything fancy in the sound department. And that is pretty much what we have here with a rather cautious but more than adequate soundtrack. The dialogue is clear and well focussed in the centre channel throughout whilst the front channels provide some good stereo steerage and channel separation. There is the occasional, but hardly taxing, use of the surround channels by the music score whilst LFE effects are nonexistent. Mind you, as with the surround channels, the nature of the film didn't really call for explosive and floor rattle effects.

The menu system is nicely animated and scored with scenes from the bachelor party providing the majority of the backdrops. Extras wise, it's nice to know that during filming the director was already planning ahead for the DVD release and filmed a number of extended scenes exclusively for the DVD. Cynics may suggest that these scenes were only cut for timing or rating purposes, but watch some of the behind the scenes features and you'll hear the cast mentioning the additional scenes for the DVD. It's good to see other directors exploiting the format to it's full potential, even if it isn't to the same extent of Peter Jackson and his magnificent Lord of the Rings films.

Although the film is concerned with the marriage of Jim and Michelle there's no doubting that the real star of the film is Seann William Scott and his character Stifler. After all he's been in more high profile films such as Dude, Where's My Car and The Bulletproof Monk. As a result he gets his own featurette as well as providing a yack track along with director Jesse Dylan whilst the other cast members have to put up with their own commentary track. Although both tracks offer the occasional giggle neither is interesting enough to warrant sticking with all the way through the film. The Stifler Speak featurette has writer and brains behind American Pie, Adam Herz, giving an interesting insight into how he envisaged Stifler to be and why Seann William Scott is so good in the role. Seann then goes on to give the low-down on what it's like to be Stifler.

The Grooming the Groom featurette goes on to show just how the 'special effects' department came up with the large amounts of pubic hair required for the many takes and Jason Biggs even demonstrates his trimming technique. Next up are twenty minutes of deleted scenes and some amusing outtakes, mainly of Seann William Scott fluffing his line with Stiflerspeak in full flow. No wedding would be complete without a wedding video so a Chessy Wedding Video is provided containing a wedding montage to scare their grandchildren for years to come. Things are rounded off with a rather pointless, but actually rather interesting, video journal of Nikki Schieler Ziering as she gets ready for the Hollywood world premiere of the film.

The first American Pie film is still the best and freshest of the trilogy whilst the shear crudeness of American Pie - The Wedding ensures that it leapfrogs the second, although the hilarious lesbian kissing scene made it a very close call (there's even a comical reference to it during the bachelor party). Fans may also be a little perturbed by the lack of Oz (who got very annoying during the second film and was a welcome omission), Jessica, Vicky and Nadia, but the overall pace of the film ensures that you don't really notice them missing. As with the second film, Jim's Dad is provided with a bigger role and has plenty of laughs along the way.

With the massive success of all three movies there are quiet mutterings of another film. Although screenwriter Adam Hertz claims there will be no more, it's amazing what the waft of money does to a man. But where would we go from here? How about American Pie - The Divorce or American Pie - The Baby? I'm sure there's still plenty of room for more madcap capers from Stifler and the gang... and I for one shall look forward to it.