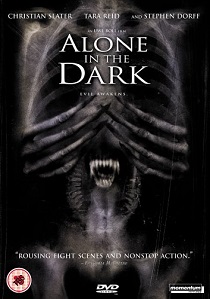 In 1967, mine workers discovered the first remnants of a long lost native American civilisation - the Abkani. The Abkani believed there are two worlds on this planet - a world of light, and a world of darkness. 10,000 years ago, the Abkani opened a gate between these worlds. But before they could close it, something evil slipped through and the Abkani mysteriously vanished from the face of the earth. Only a few artifacts remained, hidden in the world's most remote places, which spoke of terrifying creatures that thrive in the darkness, waiting for the day when the gate can be opened again.

Bureau 713, the government's paranormal research agency, was established to uncover the dark secrets of this lost civilisation. Under the direction of archaeologist Lionel Hudgens, the bureau started collecting and analysing Abkani artifacts from all four corners of the world. But when the government shut down his controversial research, Hudgens continued his work by building a laboratory hidden deep within an abandoned gold mine. There, he conducted savage experiments on orphaned children in an attempt to merge man with creature. His victims survived as "sleepers", lost souls awaiting until the gate can be reopened on the terror unleashed.

Edward Carnby is a private investigator specialising in supernatural phenomena. His cases delve into the dark corners of the world, searching for truth in occult remnants of ancient civilizations. When he investigates the mystery surrounding the recent death of his friend, he's brought face to face with bizarre horrors that prove both psychologically disturbing and lethally dangerous. With the help of ex-girlfriend Aline Cedrac, and his bitter rival Richard Burke from Bureau 713, Edward embarks on a journey where he's confronted by forces of darkness and some unwanted memories from the past.

Given the many dark and gloomy locations the picture transfer is reasonable enough. It's nothing spectacular, but the black levels are solid enough and there's no real problems with artifacting or outlining whilst there's a fair amount of detail and colour depth. However, some of the more involving scenes were more or less performed in total darkness and it was very hard to work out just what the heck was going on. At times, it was so dark it was almost X-Files territory. The special effects are noting special either, with the CGI monsters looking just like that, but the limited budget probably put an end to anything too fancy. Still, there must have been a couple of dollars spent here as the filmmakers obviously thought that there was some travel to be had from this storyline. Also, being such a recent release there are no problems with dust specks or other forms of print damage.

In a move which is to be continually congratulated, the film is accompanied by Digital 448 Kbps and DTS 768 Kbps soundtracks. Unfortunately, neither track truly sets the world alight with a musical score that ends up overwhelming just about everything else happening on screen. Although there's some good ambient effects in the surround channels and good direction in the front stereo channels, it can also end up turning into a noisy mess where "loud" is deemed to be the best idea. This becomes rather tiresome after a while as the main action elements simply end up sounding like a Hong Kong action flick whilst an unlimited supply of bullets fly all around you. It would probably have sounded a whole lot better if the heavy rock musical score had been turned down a notch or two.

Still, the dialogue is crisp and clear in the centre channel whilst the various voice over sections from Christian Slater are as equally clear. When the surround channels are not being drowned out by the heavy metal musical score, they offer some good effects with the trusty ricocheting bullets and helicopter flyovers providing the highlights. There's even some creepy effects that will make you glance over your shoulder and some good rumblings from the LFE channel. As usual, the superior separation of the DTS soundtrack offers that slight edge over the Dolby Digital version, but there's not really too much to swing it either way.

The menu system is eerily scored and animated with various cut scenes playing in the background whilst there's some nice 3D menu transition effects, although once displayed, these menus become static and silent affairs. And whilst the film is a bit of a disappointment, the extras do add some much needed value to the overall package with a reasonable commentary track and some behind the scenes making of footage.

The main extra on the disc is the Audio Commentary from director Uwe Boll, although there's no sign of any comments from the cast members (probably a wise decision to be honest). And from the off, once you can pick out the details from his German accent, he's willing to admit the many mistakes that were made during the films production. He also takes about how the film came about, his involvement in video games and the rather overrated CGI effects. There's the usual back slapping compliments for the cast members, which he obviously believes to be the absolute truth (after all, he is the director), but he appears to be living in his own dream world when it comes to the truth about this film. It's certainly an entertaining listen, but not for the reasons you'd normal expect from an audio commentary.

The eight minute Into the Dark featurette contains interviews with most of the cast, including a fair amount of input from Christian Slater, plus director Uwe Boll and writer Elan Mastal. It consists of the usual amount of promotional fluff about just how good the film is and I just wonder whether Christian Slater is biting his lip as he speaks. There's plenty of behind-the-scenes footage along with actual clips from the film, plus there's even look at Uwe Boll's other computer game based movie, the appalling looking House of the Dead. The ten minute Shedding A Light featurette looks at the various effects used in the film. VFX supervisor Doug Oddy, along with other VFX artists Ted Gervan and John Fukusima, guide us through the stunt work and the visual effects work set to green screen. Whilst the monsters are not the best looking effects in the world, some of the green screen background effects, including the now much overused bullet-time sequence, is actually rather good. It's a interesting featurette and it does offer a good amount of detail on the special effects used in the film, including some areas which you may not have realised were rendered in a computer.

Next up are two Storyboard to Screen comparisons for the two minute initial Pinkerton Chase, which includes the bullet-time scene, plus the three minute Sand Worms section. Both of these scenes are shown in split screen so it's easy to follow how the storyboard scenes became a reality. I'm always a little suspicious of these sorts of features, but in the case of Alone in the Dark they are actually well worth a viewing. The two minute Bullet Time Animatic is a fairly basic computer generated affair, although being an animatic you can't really go expecting too much. Set to some rather dramatic sounding chase music it follows the opening Pinkerton Chase scene and the actual bullet time moment is not the same as what appears in the film.

Things are rounded off with not one, but five music videos from bands I've not even heard of. The list includes Dimmu Borgir's Vredesbyrd, Hypocrisy's Eraser, In Flames' The Quiet Place, Kataklysm's As I Slither and Mnemic's Deathbox. I guess these titles will ring a bell to some of you heavy rockers out there, but to the rest of us it's just a bit of loud and noisy filler material. Still, it's better to have something rather than nothing.

Unless you are a bit of a video gamer and know everything there is to know about shoot-em ups, Alone in the Dark is based on a top selling video game. However, if you never knew this, it doesn't take too long for you to realise that with all the corny dialogue, guns with unlimited ammunition and a ridiculous story line, it could only have been based on something as mindless as a video game. With Hollywood running out of ideas, rather than Hollywood providing the video game industry with ideas and lucrative film tie-ins, it's starting to become the other way around. What's next, Spider Solitaire : The Movie?

There are bad films, and there are bad films. Quite what Christian Slater was thinking when he signed up to Alone in the Dark is something which can be talked about for months, and it might just be something he may want to take up with his agent too. After all, he's not that bad an actor with titles such as True Romance and the tongue-in-cheek Churchill : The Hollywood Years under his belt. However, the less said about Tara Reid the better, with acting that is so bad it's simply funny and something to behold. Oh, and let's not forget the grumpy looking Stephen Dorff in his usual bonkers mode. Mind you, it's not as if the story is that taxing, with a plot so full of holes you could package it up and sell it as a sponge.

Unless you're a fan of the video game, and I'm told that even then the film is nothing like the original game, it's going to be really hard to recommend this title. It's not even as if it's a scary film or that the special effects are that good - just like the video game then. The films only saving grace is the fact that it's just so awful, it's actually rather funny. It really needs to be seen so you can always remember it as a marker on how not to make a film. Avoid as a purchase, but consider it for rental, making sure you have plenty of beer and peanuts to ease the pain. It's a classic in the making, but for all the wrong reasons.