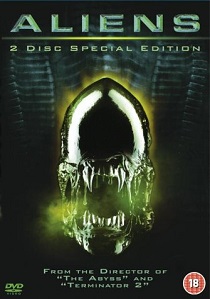 ReviewScience FictionHorror
Review Article Go back to homepage
Returning to earth after spending 57 years in hyper-sleep, nobody believes her stories about the alien and the demise of the crew. Unfortunately, whilst she was sleeping a colony was established on LV-426, the planet they encountered the alien, and contact with the colony has been lost.
Sigourney Weaver, Carrie Henn, Michael Biehn, Paul Reiser, Lance Henriksen, Bill Paxton, William Hope, Jenette Goldstein, Al Matthews, Mark Rolston, Ricco Ross
Science Fiction, Horror
2
2 Hours 28 Minutes
Thank you for supporting DVD365.net when you order using the link(s) below.
Buy DVD
Story

Returning to earth after the initial alien encounter which decimated the crew of the Nostromo, Ripley is shocked to learn that the planet has been colonised and contact has now been lost. With her expertise regarding the alien she, reluctantly, returns to planet with a crack group of marines.

The marines are totally unprepared for what awaits them and their numbers soon dwindle as the acid dripping aliens take there toll on the group. Ripley is forced to take control of the situation and battle for their survival as they encounter not one, but literally hundreds of aliens, and there's an even bigger one waiting in the wings.

The picture is a bit of an odd ball with only an average bit-rate throughout the film. It can be grainy and soft at times, especially on the initial scenes on earth, but the once one the alien planet the dark corridors and rooms are sharp with the dark and gloomy images perfect the DVD medium.

The sound is mainly dialogue based, and to be honest, is a little disappointing, although the atmospheric music is quite haunting at times. It is only during the action sequences that the surrounds and LFE's burst into life, with the sentry guns standing out.

The animated menus are quite impressive and the extras are quite good. I was especially impressed with the picture gallery. I was only expecting some stills from the film but there are numerous sketches and storyboards.

Aliens is one of the few films where the sequel far surpasses the original, and indeed the following films in the trilogy are nowhere near as good as this film, or indeed, the original film. Like the special edition video, three scenes which were cut from the original film have been restored. These additional scenes now explain a lot more about the alien presence in the colony and Ripley's enhanced maternal instincts towards Newt.

There is a scene where Ripley discovers that during her long years in hyper-sleep her own daughter has grown old and died, and more importantly the colony on LV-426 receives a message from the corporation to investigate a specific location and discover the abandoned alien ship. Finally, in one of the best scenes of the film, the robotic sentry guns defend the colony from an alien attack and the suspension is tense as the ammunition quickly runs out and the guns start to overheat. All of these scenes are important to the film and they could have only been deleted for running time purposes.

For a film nearly fifteen years old, Aliens is yet to be surpassed in the sci-fi horror genre, although Alien was the film that launched a thousand copies Aliens still has the edge. Its relatively low budget, and no fancy computer generated effects, proves you don't have to spend a bundle of cash to make a classic, flying in the face of the CGI loaded Aliens Resurrection. One final note, boy does Sigourney Weaver look young!