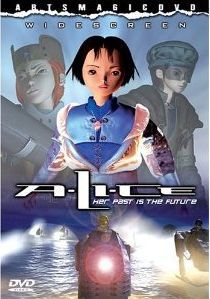 ReviewAnimationScience FictionFantasyWorld Cinema
Review Article Go back to homepage
When Alice Hayashi, the youngest person ever to go into space crashes her shuttle at the North Pole, she is thrown thirty years into the future. But her trip through time is far from accidental. The world is now ruled with an iron fist by Nero and his supercomputer, the SS10X. And because of a common link between her, Nero and the SS10X, Alice may be the future's only chance for freedom...
Kaori Shimizu, Mariko Koud, Chihiro Suzuki
Science Fiction, Fantasy, Animation, Eastern Cinema
All
1 Hour 24 Minutes
Buy DVD
Story

Winning the lunar Sweepstakes, Alice becomes the youngest person to go into space. However, upon returning to earth, her shuttle is forced to crash land at the North Pole. Alone with the robot stewardess Maria, the pair are forced to flee for their lives when they come under attack from a group of unknown soldiers. Fortunately, with the help of Yuan, one of the few remaining humans in the area, they are able to avoid capture and seek sanctuary in Yuan's underground bunker.

Still puzzled by the goings on, Alice is shocked to learn that she has been catapulted thirty years into the future and to a world ruled with an iron fist by Nero and his supercomputer, the SS10X. But her trip through time was far from accidental and if Alice is to discover why she was brought into the future she must battle her way to Nero's stronghold and to a place called The Kingdom.

But as Alice and her new companions start their arduous journey they are captured by the Liberation Army. This ragtag group of soldiers is desperately fighting to remove Nero and when they discover who Alice is they reveal the common link between her, Nero and the SS10X. Only Alice holds the key to defeating Nero and finally bringing peace and freedom to this ravaged world.

Although the animation is not going to win awards, and does rather look like a Playstation or X-Box game, it is surprisingly involving and satisfying. Never the less, for a CGI animated feature the source material is certainly not from the digital domain - more likely a video tape stored on a dusty shelf. As a result, the picture can be quite noisy and grainy at times, especially in some the brighter scenes where images of direct sunlight cause serious problems. Fortunately though, there are no real problems with artifacting or outlining whilst the print is relatively clean and free from any signs of serious damage.

It's also interesting to learn that A-Li-Ce was the first film in Japan to be presented digitally using the Digital Light Processing (DLP) system. The same system was also used in the US presentation of Star Wars Episode I : The Phantom Menace and it is a process which allows images to be projected onto cinema screens with a definition equal to 35mm film. However, it's just a pity that the picture transfer and the end result on the DVD isn't up to DLP standards.

The film is accompanied by both English and Japanese 448Kbps Dolby Digital 5.1 soundtracks. The dialogue is clear and precise in the centre channel whilst the front stereo channels also accommodate the dialogue and other effects. The surround channels are fairly active throughout, even if the effects aren't that particularly impressive, whilst the large amounts of effects on offer can occasionally over power the soundstage and make things a bit messy and confusing.

And as is the case with most Japanese to English translations, the lip sync is unsurprisingly off the mark whilst the English subtitle track doesn't always match the on-screen dialogue. Similarly, the actual English soundtrack is a little on the poor side too with some rather poor acting at times. I often wonder with productions such as this whether the actors actually saw the footage they were providing the dub for as in some instances, although not the case here, the end result can be quite appalling.

The main menu is simply, but effectively, animated and scored whilst the sub menus are static and silent affairs. Extras wise, things are a bit of a mixed bag with plenty of filler material and duplicate material from other releases whilst the only real extras is the thirty minute interview with director Kienichi Maejima. However, duplicated from other releases or not, one of the most interesting featurettes I've seen for a long time is the thirty minute feature Final Fantasies - A History of CGI Animation.

Presented by the co-author of The Anime Encyclopaedia, and recorded in an amphitheatre at the Sci-Fi London premiere of Malice@Doll, Jonathan Clements provides his rather sparse audience with a host of interesting facts about the history of CGI in Japanese animation. Whilst fans of anime are bound to be familiar with many of the titles mentioned those relatively new to the scene, such as myself, will find the information extremely interesting. However, it should be noted that this featurette is repeated from the already released Artmagic title Malice@Doll and thus if you already own that title then the overall value is somewhat diminished.

The interview with director Kienichi Maejima is interesting enough and if you explore the Biographies/Filmographies section you'll also see that he is credited with creating the successful Dreamcast game Shenmue. Naturally, for a native Japanese film it would be rather unusual to have the interview performed in English so unless you understand Japanese then the optional subtitles is a bit of a must. In the interview Kienichi Maejima talks about the film and the use of the DLP projection system as well as discussing the various technical aspects of the film and even refers to the original storyboards to explain how a scene was formed. It's all rather interesting stuff.

Rounding things off, there's also a rather interesting Gallery with twenty five differing pictures, sketches and stills from the production, whilst there's a bit of filler material in the form of the cover artwork and synopsis for A-Li-Ce and The Blue Remains. Likewise, trailers for both titles are also included.

Whilst I was rather disappointed by the more recent release of The Blue Remains, this slightly earlier release of A-Li-Ce is much better in both the plot, cohesion and, strangely enough, given the differences in standards, the computer animation. Again, given the tiny budget which is so often only available to these remarkable productions, the end result is fantastic and it far surpasses anything that I was expecting for a genre which up until now I found rather disappointing. As a result, fans of the Anime genre are going to very happy with the results. It's yet another cracking DVD release from Artsmagic. Long may it continue.