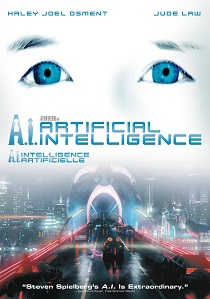 In the not to far distant future the greenhouse effect has caused the polar ice caps to melt. The rise in the ocean waters has inundated the coastal cities of the world and caused hundreds of millions of people to die of starvation. With the population now living in the deep interiors of the major continents, land is at a premium and a couple must obtain a license before having a child.

Thanks to technology, robots with advanced artificial intelligence are now the norm. They are capable of carrying out pretty much everything you can think of without the need for food. Robots are big business and one of the few remaining booming industries on the planet. One such company sees a gap in the market for a substitute child and they decide to create a child who can love.

Once developed they decide to try prototype on a company employee, Henry Swinton, whose own child is presently in cyrostasis waiting for a cure for an incurable disease. Unsure at first, the robot David soon manages to melt the heart of Henries wife Monica and she eventually decides to invoke the programme that will cause David to treat the family as his real parents. Everything is going well for the new family until one day the phone rings and their real son comes home.

After a number of incidences David falls out of favour. Rather than returning him to the company to be destroyed David is abandoned in the countryside. After hearing the fairytale story of Pinocchio, David sets out on a quest to locate the blue fairy so she will turn him into a real boy allowing him to return home to regain the lost love of his human mother.

The picture is rich and colourful with vibrant colours and a high bit-rate throughout the film. This is especially evident during the night time scenes in Rouge city. With its masses of bright colours and varying hues of red it could turn out to be a real challenge, but it manages it all with ease with no signs or artifacting or outlining. However, the scenes inside the house, especially during the films finale, seemed to be a little too soft and grainy. I haven't made my mind up on whether this is intentional.

The CGI effects on show from ILM are certainly impressive, with Manhattan being especially striking and almost real, even if the cityscape wasn't quite correct. Also, if I wanted to be really pedantic, would the oceans really rise by that amount? Anyway, all of these effects seemed to take up most of the budget as the final section of the film and its major characters seemed to be a little poor in comparison.

The sound is good enough, although it was not quite as good as I was expecting. With this being pretty much a dialogue intensive film most of the activity remains locked in the centre channel throughout the film. The dialogue is crisp and easily audible and there is a reasonable amount of activity in the surround channels with a well balanced musical score.

The best part is undoubtedly the musical score. It is quite stunning and could just well be John Williams best to date. It really adds an amazing amount of ambience to the film and if you're a fan of classic music then you should definitely consider looking into the soundtrack CD.

Although the region one edition has an additional DTS soundtrack the region three edition reviewed here, along with the region two, only has the Dolby Digital soundtrack. I always favour the DTS soundtrack and I would have liked to hear what it could do. I suppose this could be forgiven as the other editions need to carry more subtitles for the many languages covered by their respective region codes.

The menu system is nicely animated and scored on both discs but once you get to the lower sub-menus the animation and score stops. I suppose you can't have everything and what's on show here is certainly pleasant enough and blends in well with the overall mood of the film.

Although the extras seem bountiful in their number they've really only split one long documentary into a number sections in the hope of keeping you interested. After watching the interesting sections on the special effects and animatronics it all gets rather stale and boring. I was especially irked by the Spielberg interviews and the manner that he kept trying to make out that it was a tribute to Kubrick when really it was just another Spielberg rollout.

The interview with the cast is reasonable enough and that young and precocious Haley Joel Osment continues to amaze with his acting skills and thoroughly professional interviews. I just wonder as he gets older, and when his voice breaks and he shoots up in height, whether he'll still be in demand from Hollywood. It's all rounded off with the usual trailers and some interesting production stills and far too many storyboards.

On the plus side, it is good to see a region three disc with this level of extras. Most other Hollywood films I've seen on sale on DVD in Asia have been totally devoid of extras, let alone having animated and scored menus. Obviously Warner and DreamWorks have made an attempt at a global release standard (if you discount the DTS soundtrack) and must be congratulated for it.

I hate the paper packaging the two disc set comes in and it's sure to fall apart. On the rear of the outer disc packaging, and on the region three edition at least, a big chunk of text has been hacked out for the finger cut-out that totally ruins the packaging. Just what were they thinking?

After all of the hype I was a little disappointed with the film. Steven Spielberg kept going on about it being a Stanley Kubrick film but when you watch it there are only faint influences from the great director. Whilst watching the various Spielberg interviews you get to learn a bit more background information on the project and how he wanted to put some of his own ideas into the film. And that he has, as it ends up more like being a rehash of E.T, Close Encounters and, which were amongst my first thoughts, Blade Runner (Ok, so he didn't direct the later, but you get the drift). With the pace of today's technology the film certainly touches on an important subject and gives you plenty to think about. However, once you start to think about what you've just seen it doesn't really answer any questions and it ends up being a bit of a muddle. You just have to watch the closing comment from Spielberg for it to be made even worse.

One moment that made me laugh was towards the end of the film. (skip this paragraph if you don't want a spoiler). It was when the alien was commenting to David about the genius of mankind. Yeah, I thought, a great load of geniuses they were for destroying the planet and killing themselves off. But, hey, at least they invented intelligent robots.

If you want a film that deals with the subject of artificial intelligence in a much more profound manner then you should really consider looking at Bicentennial Man.