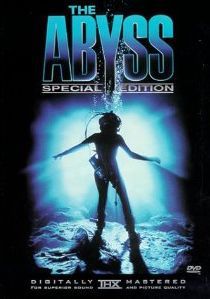 The USS Montana is an American nuclear submarine on patrol during the height of the cold war. When it is buzzed by a mysterious craft they assume it is Soviet and pursue at maximum speed. Unfortunately, the submarine hits a channel wall and is lost to the abyss complete with crew and complement of nuclear missiles.

The US Navy is scrambled and sends some rescue divers to the scene to recover the nuclear warheads before the nearby Russian forces. A nearby civilian deep sea oil drilling platform is called in to help locate the wreck and the together with the SEALS soon locate the submarine.

During the rescue operation a hurricane hampers the surface craft and communications are soon lost with the deepcore vessel as a crane crashes down to the sea floor. Whilst searching the wreckage the crew encounter a strange and calming entity, but the SEAL commander believes that it is a new Soviet craft and sets off on a top secret mission which threatens the crews safety and trigger a war.

With so many dark rooms and underwater scenes the picture is quite remarkable. The picture is sharp with plenty of colour and detail, but this is occasionally let down by the sharpness of the picture revealing some of the blue screen special effects. However, it is the sound which really makes this film shine. The surround channels are extensively used for ambient sounds of dripping water and groaning metal under pressure. They definitely highlighted the claustrophobia of being enclosed and underwater and it certainly put me off ever going in a submarine!

Although there aren't too many LFE's, when they are introduced they are used to great effect. This is especially evident during the crane incident and the subsequent flooding of the vessel. The dialogue channel is clear with no bleeding to the other channels and the balance between the dialogue and effects were perfectly balanced.

The menus are just as impressive. They are based in the docking bay of the deepcore vessel and whenever an option is selected the menu pans around the bay and moves to another room before offering another set of options. Clever stuff which was also repeated in the Independence Day special edition disc set.

There are so many extras with this film that there is a second disc just for them. There are so many to look at you can get completely lost exploring the menus. One of the most impressive sections of the disc is the complete film storyboard, all 700 of them!

This is probably James Cameron's best film, even better than Titanic and Terminator. When the film was released CGI graphics were still in their infancy and the Psuedopod scene caused quite a stir. With the lack of computers to help directors out they relied on the wonders of the model maker and the good old blue screen. The tidal wave ending could not be added to the special edition until the CGI technology was available.

The only let down on the film is the lack of a directors audio commentary. Unlike the laserdisc special edition, there is only a textual version. However, it is still very informative, especially regarding the special effects and the way the actors had to cope working underwater. I'm not sure whether it is a textual transcript from the laserdisc, but the only reason I can think of this omission is due to the lack of space on this disc.

Even if you already own the standard edition of this disc you should certainly consider purchasing this special edition. It explains much more about the various characters and even shows the escalating tension between the two superpowers on the surface which was hardly even mentioned in the original version.