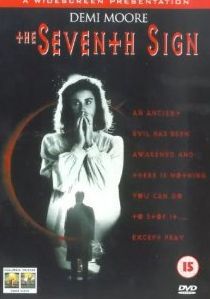 ReviewHorror
Review Article Go back to homepage
Time is running out. The signs are here - rivers are turning red with blood, the moon has turned crimson and the seas are dieing. Judgement day is approaching and the six signs have past leaving only the seventh to be revealed and the end of the world.
Demi Moore, Michael Biehn, Jürgen Prochnow, Peter Friedman, Manny Jacobs, John Taylor, Lee Garlington, Akosua Busia
Horror
2
1 Hour 33 Minutes
Thank you for supporting DVD365.net when you order using the link(s) below.
Buy DVD
Story

Abby Quinn is pregnant but is worried. Her previous pregnancy failed and this one is touch and go and the stress is starting to show. Her dedicated lawyer husband is trying hard to keep her calm but he to is under great pressure as he fights a losing battle to save the life of a convicted murderer.

When the pair decide to rent a room to a stranger Abby is intrigued by the boarder. On exploring his room she comes across some ancient scripts which foretell Revelations and the end of the world. As she watches the daily diet of world news on the television she comes to realise that the prophecies are coming true and that the boarder may be some religious wacko who wants to murder her and the unborn child. However, a bizarre set of dreams and a strange experience convinces her that the stranger is part of the prophecy and she must discover what the seventh sign is and how to stop it.

For a film over tens years old, and the fact it was a relatively unknown low budget affair, the picture is not too bad. As with most of their other film stock, Columbia Tri-Star have made a fair effort with this film with an above average bit-rate throughout. However, in the darker scenes it does suffer from graininess and too much contrast spoils the outdoor scenes.

The age of the film means no Dolby Digital, but the pro-logic soundtrack is surprisingly good with many atmospheric sounds in the rear channel. There is haunting music, howling gales and even a helicopter passing over from the rear. The only letdown are the extras. The filmography information is poor and the trailers are just promotions for Columbia Tri-Star's back catalogue of Demi Moore films.

If you like the Omen genre of films then this is the perfect film for your collection. The suspense is good, the acting from Demi Moore commendable without needing a $12 million dollar pay cheque and the ending unexpectedly sad, but uplifting at the same time. Don't let the fact that this back catalogue film has only been released because Demi Moore is in it.