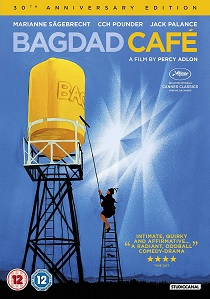 Under the supervision of legendary cult director Percy Adlon, the charming and eccentric comedy Bagdad Café has been stunningly restored to mark its 30th Anniversary.

Driving through the Mojave Desert somewhere between Las Vegas and Disneyland, Jasmin (Marianne Sägebrecht) strikes out on her own following a row with her husband. Trudging down the highway, she catches the attention of Brenda (CCH Pounder), the irascible proprietor of the Bagdad Café. So begins a hilarious and touching account of these two women of different cultures, joined together in the middle of desolation in an oasis of friendship.

Bagdad Café is released on DVD and Blu-ray 13th August 2018 from StudioCanal.

HotBD
Combining the bio-horror elements of his earlier films whilst anticipating the technological themes of his later work, Videodrome, released on Blu-ray from a restored high-definition digital transfer by Arrow Films on 7th December 2015, exemplifies Cronenberg's extraordinary ... END_OF_DOCUMENT_TOKEN_TO_BE_REPLACED
Top PicksView