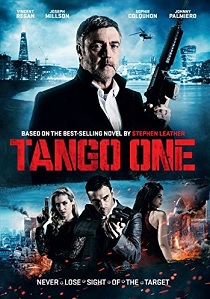 Step into the ruthless London criminal underworld and prepare yourself for action of the most brutal order when the film adaptation of Stephen Leather's nail-biting thriller Tango One launches on Digital Download from 5th March 2018, and DVD from 19th March 2018 from Universal Pictures (UK).

Based on the award-winning and best-selling novel by top UK thriller author Stephen Leather (Murder in Mind, London's Burning) and directed by Sacha Bennett (Get Lucky, We Still Kill the Old Way), Tango One is a fast-paced crime thriller about how far one man will go to rescue his daughter, and save his criminal empire from collapse.

When three undercover recruits are assigned an impossible mission to take down one of the world's most wanted man, notorious drug dealer, Den Donovan (Vincent Regan; 300, Bonded by Blood), they have no idea who they are dealing with. As the undercover recruits inch closer to their target, they are each drawn in by the charismatic criminal leader - too close, perhaps, to remember the rules.

Get ready for an electrifying, home-grown thriller as Tango Onereleases on Digital Download on 5th March 2018, and DVD from 19th March 2018.

DVD
Four years after South Korea's total decimation in Train To Busan, the zombie outbreak thriller that captivated audiences worldwide, the next nail-biting chapter in the post-apocalyptic world Train to ... END_OF_DOCUMENT_TOKEN_TO_BE_REPLACED
Hot PicksView