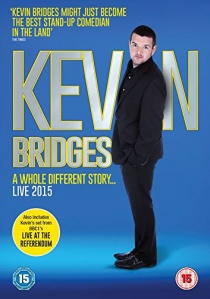 Scotland's biggest entertainment export, Kevin Bridges has had an astonishing rise to success. His 2015 UK tour A Whole Different Story... has sold nearly 400k tickets since going on sale, and this Christmas gives you the chance to sit back and witness it for yourself as his latest live show is released on Digital Download on 9th November 2015 and Blu-ray and DVD on 23rd November 2015, by Universal Pictures (UK).

A Whole Different Story... sees Kevin take us on a journey of his under the radar infiltration into the middle classes, and about living in the West End of Glasgow where things aren't quite as they used to be. Of course, with this comes the added novelty of having money for the first time and Kevin shares his views on that, as well as musing on politics, and the ever - topical Scottish referendum. The razor sharp wit on show here proves he is one the UK's brightest young talents and really makes this the DVD for any comedy fan this Christmas.

The 2015 UK tour included a staggering 16 nights at The SSE Hydro in Glasgow (capacity 10,500), 9 nights at the Aberdeen GE Oil & Gas Arena (capacity 4,500) and 5 nights at the Edinburgh Playhouse (capacity 3000) in Scotland alone. A 2014 report from Ticketmaster cited Kevin as the official top selling UK comedy act of 2014 due to his amazing ticket sales across all dates, beating the likes of Lee Evans, Mrs Brown's Boys, Michael McIntyre and John Bishop in the top 5.

BD
After more than thirty years of service as one of the Navy's top aviators, Pete 'Maverick' Mitchell is back where he belongs as Top Gun: Maverick flies onto DVD, Blu-ray and 4K UHD 31st October 2022 from Paramount Home ... END_OF_DOCUMENT_TOKEN_TO_BE_REPLACED
Top PicksView