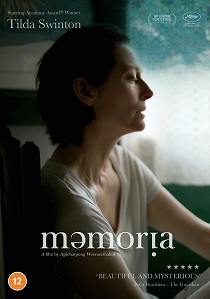 Sovereign is proud to announce the release of Apichatpong Weerasethakul's acclaimed metaphysical drama Memoria and on a special dual format Blu-ray collector's edition, and DVD, on 25th July 2022.

Winner of the Jury Prize at last year's Cannes Film Festival, and nominated for the Palme d'Or, Oscar-winner Tilda Swinton (The French Dispatch, The Souvenir) stars in Apichatpong Weerasethakul's meditative exploration of memory and the human condition. The Guardian describes the film as "slow cinema that decelerates your heartbeat", saying the actress and director make a "dream team".

It's a film that starts with a literal bang, as Swinton embarks on a lyrical and profound journey into the senses that Indiewire describes as "a transfixing deep-dive into the profound challenges of relating to people and places". The journey leads to an unexpected and extraordinary revelation where, as the actress herself explains, "all the wisdom in the world is being revealed to this person at this moment".

Weerasethakul's Uncle Boonmee Who Can Recall His Past Lives won the Palme d'Or prize at the 2010 Cannes Film Festival, and Tropical Malady won a jury prize at Cannes in 2004; Memoria is his long-awaited first English language feature shot outside his native Thailand, and his most accessible film to date.

Following a successful UK cinema release earlier this year, you can now enjoy the film in your own home, with a streaming release in June and, in July, a Special Limited Edition Collector's Dual format Blu-ray edition, including the UK Theatrical Poster and a collector's booklet featuring specially commissioned writing about this haunting, mesmeric classic. There will also be a DVD edition released.

Visiting her sister in Bogota, Jessica (Tilda Swinton) is awoken by a loud bang, audible only to her. Restless and disoriented, she roams the city in search of an explanation for the mysterious sound, becoming immersed in the aural richness around her - whispers in a hospital room, sound effects playing in an editing studio, indiscreet noises from a city square.

Despite being present throughout, Jessica's motives remain opaque and her encounters enigmatic. Soon she begins to confront the unsettling sights and sounds that call her identity into question. 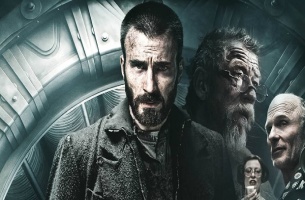 HotDVDBD
Starring Chris Evans, Snowpiercer, the post-apocalyptic ice age thriller set on a train that travels around the globe, is released on DVD and Blu-ray 25th May 2020 from Lionsgate Home Entertainment. END_OF_DOCUMENT_TOKEN_TO_BE_REPLACED
Comments
Hot Pick