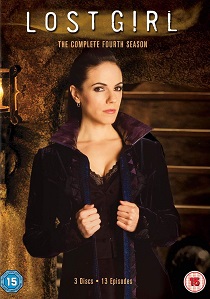 Anna Silk (Assassins Tale) is back in her star-making role as Bo, the fan-favourite human Succubus. In the seductively entertaining fourth season, fate casts a wide shadow over the Fae world, causing Bo to venture into a journey of discovery. Bo and company ultimately realise that regardless of the challenges and enemies they face, they're stronger when they face them together.

In Season 4, fate casts a wide shadow over the Fae world. With Bo's (Anna Silk; Being Erica, Ghost Whisperer) return, we see the lines between Dark and Light Fae blurred causing Bo to venture into a journey of discovery.

Each episode of Lost Girl: Season Four has a run time of approximately 42 minutes and is rated 15.