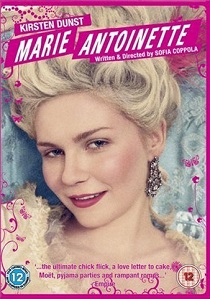 From Academy Award winning screenwriter and director Sofia Coppola (Lost in Translation, The Virgin Suicides) comes a dazzlingly youthful 21st Century movie about an 18th Century legend. Based on Antonia Fraser's acclaimed biography, Marie Antoinette is available to buy on DVD and Blu-ray and to rent on DVD from 26th February 2007, courtesy of Sony Pictures Home Entertainment.

The sumptuous story begins when 14 year old Marie Antoinette (Dunst) is taken away from her family and friends in Vienna to the court at Versailles, an unwilling pawn in a political marriage. Ignored by her teenage husband, Louis (Schwartzman), heir to the French throne, and surrounded by detractors, flatterers and gossips, she seeks refuge in the decadence of the French aristocracy and in a secret love affair with the alluring Swedish Count Fersen (Jamie Dornan).

Her indiscretions are soon the talk of the nation. Yet slowly, as she matures, she begins to find her way as a wife, mother and Queen - only to be tragically swept up in a bloody revolution that alters the history of France. Coppola's strikingly original visual style re-imagines the court of Versailles through the lens of today's pop culture, with stunning costumes and an unforgettable soundtrack including an exclusive orchestral version of the Siouxsie & The Banshees hit "Hong Kong Garden" and music from My Bloody Valentine's Kevin Shields, The Cure, New Order and The Aphex Twin amongst others.

DVD
Tender and violent, terrifying and comic, The English, released on DVD 19th December 2022 from Dazzler Media., takes the arrows and bullets of its genre only to twist them into a uniquely compelling parable on gender, race, ... END_OF_DOCUMENT_TOKEN_TO_BE_REPLACED
Top PicksView