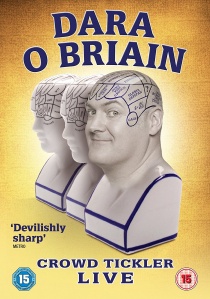 With his first UK and Ireland tour for three years, Dara O Briain makes a welcome return to the stand-up comedy stage with his brand new show. Crowd Tickler sees the host of Mock The Week and Star Gazing Live back doing what he does best - delivering witty and daring anecdotes like no other stand-up comedian. Crowd Tickler Live is released on Digital Download on 9th November 2015 and DVD on 23rd November 2015.

Recorded at the Hammersmith Apollo as part of a 113 date UK & Ireland tour, the king of audience interaction once again takes to the stage in a show that captures a series of seminal quips delivered at supersonic speed, combined with smart and provocative observational material. Dara's intellect, naturally comedic tone and perfectly timed physical gags cement him as one of the must - see comedy acts for 2015.

Crowd Tickler Live sees him re turn to his most natural environment, so don't miss the chance to catch one of the most charismatic, intelligent, witty and downright funny live performers today as his show comes to DVD.

Crowd Tickler Live is produced by Open Mike Productions and released by UPHE Content Group. Executive producers are Andrew Beint, Danny Julian, Joe Norris and Helen Parker, with Anthony Caveney and Mia Cross as producers and Chris How as director.

DVD
After more than thirty years of service as one of the Navy's top aviators, Pete 'Maverick' Mitchell is back where he belongs as Top Gun: Maverick flies onto DVD, Blu-ray and 4K UHD 31st October 2022 from Paramount Home ... END_OF_DOCUMENT_TOKEN_TO_BE_REPLACED
Top PicksView