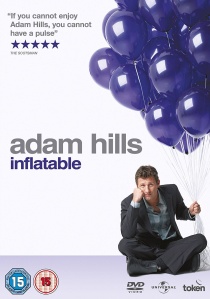 NewsStandup Comedy
News Article Go back to homepage
Finally comedy fans in the UK can see Adam Hills in action as Inflatable is reissued on DVD on 5th November 2012 by Universal Pictures (UK) and will now be available retail-wide throughout the UK.
Adam Hills
Bruce Kane
Universal Pictures (UK)
Unknown
05/11/2012
Thank you for supporting DVD365.net when you order using the link(s) below. As an Amazon Associate we earn from qualifying purchases
Buy DVD
Information

Fresh from his triumph as host of Channel 4's critically acclaimed Paralympics entertainment show The Last Leg with Adam Hills, Inflatable is Australian funny man Adam Hills' long-awaited debut stand-up DVD release. Finally comedy fans in the UK can see the man in action as Inflatable is reissued on DVD on 5th November 2012 by Universal Pictures (UK) and will now be available retail-wide throughout the UK.

Soon to be a regular on our TV screens, Adam has an exciting year ahead as he has just signed an exclusive one-year deal with Channel 4 where he will be involved in numerous TV projects throughout the year. This includes a one-off Christmas special of The Last Leg with a subsequent series due to air in January 2013.

2012 Logie Award winner Adam Hills celebrates his 21st year in stand up comedy and his 40th birthday live on stage at Melbourne's Athenaeum Theatre, with a special performance of his effortlessly brilliant show 'Inflatable'. This unique one of a kind comedy show also features an onstage sign interpreter for the deaf and hard of hearing throughout the entire performance.

Inflatable is a raucous, poignant and ultimately uplifting show that received five star reviews from Melbourne to Edinburgh and played to sold out audiences across the UK. Adam discusses the intricacies of sign language, the politeness of the Dutch, prostate awareness, what it feels like to have an "old man rant" and the joy of seeing the Beijing Paralympics live.

Of course, no Adam Hills show is complete without including members of the audience, so you'll see an impromptu Boy Band performance, a sexy toy goody bag and much more. Let Adam Hills inflate you with this riotous live show. Joyous, uplifting - Inflatable.

Three times nominated for the prestigious Perrier Award, Adam's solo shows are established highlights at the Edinburgh Fringe where he regularly sells over 10,000 tickets in the month. He has been awarded Australia's Helpman Award for Best Comedy Performance and has received the Best of the Fest and Forth Fringe Award from Edinburgh Fringe critics.

As the host of his own music quiz show in Australia, Spicks and Specks, Adam Hills is seen by more than 1.2 million people on a weekly basis. He also hosts his very own chat show on ABC Australia entitled Adam Hills In Gordon St Tonight. His appearances on both shows earned him the prestigious honour of winner in the Most Popular TV Presenter category at the 2012 Logie Awards, Australia's equivalent to the UK's BAFTA TV Awards.

His UK TV appearances include The Last Leg with Adam Hills (Channel 4), Live At The Apollo (BBC ONE), Mock The Week (BBC TWO) and Never Mind The Buzzcocks (BBC TWO). He has also presented his own half-hour special on Comedy Central as well as hosting two series of Four At The Store (BBC Radio 4), 4 In A Field (BBC Radio 4) and co-presented We Say Tomay-to on Radio 2.