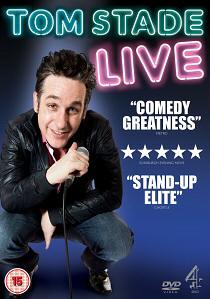 Since arriving in the UK, Tom Stade has earned a reputation as one of the most exciting stand-up talents on the scene. 2011 saw him embarking upon his eagerly awaited debut tour; playing to packed houses across the UK and garnering rave reviews. Tom also scooped a nomination for 'Best Headliner' at the Chortle Awards and took the Edinburgh festival by storm with his hit show What Year Was That?; firmly cementing his reputation as a distinctive and formidable live act.

Tom returned to the festival in 2012 with a brand new offering: Tom Stade Totally Rocks and added extra dates due to popular demand. Tom's Totally Rocks tour will have played to over 50,000 by the end of 2013.

Tom's comedy is distinctive, his refreshingly laid-back and unconventional ethos on life comes across in his material as he playfully leads the audience into a world where there are no boundaries and anything goes! Filmed in front of a live audience at Bloomsbury Theatre, enjoy Tom's stylish and unique comedy, packed with sharp and inventive observations, from the comfort of your own home.

UHD
Tom Hardy returns as the lethal protector Venom, one of Marvel's greatest and most complex characters in Venom: Let There Be Carnage, available on 4K Ultra HD, Blu-ray and DVD on 3rd January 2022 from Sony Pictures Home ... END_OF_DOCUMENT_TOKEN_TO_BE_REPLACED
Top PicksView