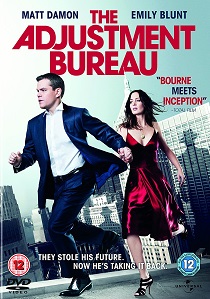 Prepare for the ultimate battle against fate as Academy Award® winner Matt Damon (The Bourne Trilogy, Good Will Hunting) and co-star Emily Blunt (The Devil Wears Prada, The Wolfman) learn they are up against the agents of Fate themselves. Directed by BAFTA Award® nominee George Nolfi (The Bourne Ultimatum), The Adjustment Bureau races its way onto Blu-ray and DVD on 4th July 2011 from Universal Pictures (UK).

David Norris (Damon) is an ambitious, well respected politician, on the verge of a landmark change in his life and a seat into the U.S Senate. He is up in the polls and his campaign team, led by his trusted campaign manager Charlie Traynor (Michael Kelly; Changeling, Dawn of the Dead), have the highest of hopes for him.

A chance meeting sees Norris cross paths with Elise Sellas (Blunt), an aspiring contemporary ballet dancer with dreams of making it to the top of her field. Norris has already glimpsed the future Fate has in store for him and realises he wants something very different. To get it he must win the affections of the only woman he has ever loved, whilst avoiding being intercepted by the agents of The Adjustment Bureau.

Led by Agent Thompson (Terence Stamp; Wanted, Valkyrie), the agents of the Bureau will do everything in their power to ensure that chosen individuals follow the paths dictated to them by the forces of Fate. Agent Harry (Anthony Mackie; The Hurt Locker, Eagle Eye), has been assigned to this case and must keep close tabs on Norris whilst remaining under the watchful eye of his highly strung supervisor Agent Richardson (John Slattery; Mad Men). In the eyes of the agents at the Bureau, free will has no place.

Adapted from short story The Adjustment Team by the visionary writer Phillip K Dick (Blade Runner, Minority Report), The Adjustment Bureau takes you on an exhilarating journey that will leave you wondering what is really in control of your destiny.

UHD
Sam Mendes, the Oscar®-winning director of Skyfall, Spectre and American Beauty, brings his singular vision to his World War I epic, 1917 to DVD, Blu-ray and 4K Blu-ray 18th May 2020 from ... END_OF_DOCUMENT_TOKEN_TO_BE_REPLACED
Top PicksView