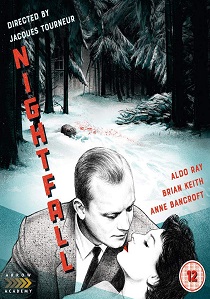 NewsDramaCrimeArrow
News Article Go back to homepage
In Nightfall, released on Blu-ray 3rd June 2019 from Arrow Academy, through a series of bizarre coincidences, an artist finds himself falsely accused of bank robbery and murder and is pursued by the authorities and the real killers.
Aldo Ray, Anne Bancroft, Brian Keith, Jocelyn Brando, James Gregory, Frank Albertson
Jacques Tourneur
Ted Richmond
Arrow Academy
1 hour 19 minutes
03/06/2019
#Nightfall
Thank you for supporting DVD365.net when you order using the link(s) below. As an Amazon Associate we earn from qualifying purchases
Buy BD
Information

During his long and varied career, Jacques Tourneur (The Comedy of Terrors, Cat People) tackled a breadth of genres on both sides of the Atlantic. With 1956's Nightfall, he returns to the noir trappings he tackled so successfully with Out of the Past for a tale of deception, intrigue and paranoia.

Adapted from the novel by prolific crime fiction author David Goodis (Dark Passage), Nightfall is the story of Jim Vanning (Aldo Ray, The Violent Ones; The Naked and the Dead), an innocent man wrongly accused of murder. On the same night he has a chance encounter in a bar with glamorous model Marie (Anne Bancroft, The Graduate), the hoods he's spent the past year running from catch up with him, determined to recover the money they believe he stole from them. Pursued by both the hoods and law enforcement, Vanning and Marie go on the lam, leading to a desperate chase that takes them from the streets of Los Angeles to the snowy peaks of Wyoming.

Eschewing both the big names associated with the genre and its familiar urban locales, and featuring striking monochromatic photography by Oscar-winner Burnett Guffey (From Here to Eternity), Nightfall is a gripping and inventive late-period noir which shows that, even in its twilight years, the genre still had room for innovation.

Nightfall is released on Blu-ray 3rd June 2019 from Arrow Academy.