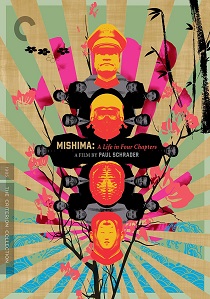 In this visually stunning, collagelike portrait of the acclaimed Japanese author and playwright Yukio Mishima (played by Vengeance Is Mine's Ken Ogata), Paul Schrader (American Gigolo) investigates the inner turmoil and contradictions of a man who attempted the impossible task of finding harmony among self, art, and society.

Taking place on Mishima's last day, when he famously committed public seppuku, the film is punctuated by extended flashbacks to the writer's life as well as by gloriously stylised evocations of his fictional works.

With its rich cinematography by John Bailey, exquisite sets and costumes by Eiko Ishioka, and unforgettable, highly influential score by Philip Glass, released on Blu-ray 11th June 2018 from Sony Pictures Home Entertainment, Mishima: A Life in Four Chapters is a tribute to its subject and a bold, investigative work of art in its own right.

HotDVDBDUHD
Fast forward to the 1980s as Wonder Woman's next big screen adventure finds her facing a wide array of foes including Max Lord and The Cheetah as Wonder Woman 1984 flies in on Blu-ray and 4K UHD 22nd March 2021 from Warner Home Video. END_OF_DOCUMENT_TOKEN_TO_BE_REPLACED
Top PicksView