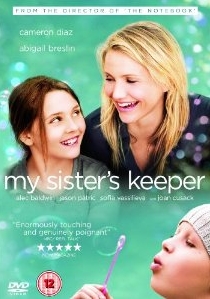 NewsDramaCameron Diaz
News Article Go back to homepage
My Sister's Keeper, Nick Cassavetes's child-cancer-courage tearjerker based on Jodi Picoult's 2004 bestseller, is being released by Entertainment In Video on rental and retail DVD and Blu-ray on 23rd November 2009.
Cameron Diaz, Alec Baldwin, Jason Patri, Walter Raney, Sofia Vassilieva
Nick Cassavetes
Entertainment In Video
1 hour 49 minutes
17/04/2019
Thank you for supporting DVD365.net when you order using the link(s) below. As an Amazon Associate we earn from qualifying purchases
Buy DVD
Buy BD
Information

My Sister's Keeper, Nick Cassavetes's child-cancer-courage tearjerker based on Jodi Picoult's 2004 bestseller, is being released by Entertainment In Video on rental and retail DVD and Blu-ray on 23rd November 2009. The star studded cast is headed by Cameron Diaz (Charlie's Angels; Being John Malkovich; Something About Mary), Alec Baldwin (The Departed; The Cooler), Jason Patric (Sleepers) and Jason Patri (Little Miss Sunshine).

Sara and Brian Fitzgerald's (Cameron Diaz and Jason Patric) life with their young son and their two-year-old daughter Kate (Sofia Vassilieva) is forever altered when they learn that Kate has leukemia.

The parents' only hope is to conceive another child specifically to save Kate's life. For many people, genetic engineering on such a scale would raise both moral and ethical questions but for the Fitzgeralds... and Sara in particular... there is no choice but to do whatever it takes to keep Kate alive. And what it takes is Anna (Abigail Breslin).

Kate and Anna share a bond closer than most sisters and although Kate is older, she relies on her little sister hugely to help her through life. Anna, however, is coming to terms with the realization that she was brought into the world to be a donor for her sister which not surprisingly she finds increasingly hard to cope with.

The girls have to endure a series of painful but ultimately futile medical procedures and hospital stays but they see it as just another part of their close-knit family's otherwise normal life. Sara, a loving wife and mother who gave up her career as a high-flying attorney to care for her daughter, is sometimes emotionally overwhelmed by the single-minded carer she has become in her efforts to save Kate.

Her strong and supportive husband Brian (Jason Patric) is often rendered powerless by his wife's strength and determination while their only son Jesse (Evan Ellingson) drifts and is at times all but forgotten as Kate and Anna take centre stage.

However, when Anna is asked to donate one of her kidneys to help Kate she decides that she's suffered enough and hires her own lawyer (Alec Baldwin) who initiates a court case to seek what he describes as 'medical emancipation'. The court action divides Anna's family and leaves Kate's rapidly failing body in the hands of fate.