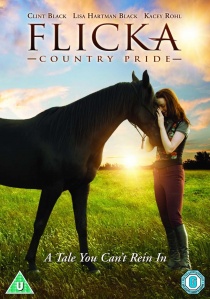 Saddle up for the heartwarming tale of a friendship between a girl and her horse in Flicka: Country Pride, released on DVD on 7th May 2012 from Twentieth Century Fox Home Entertainment.

The third installment of the successful family franchise sees Toby (Clint Black, Flicka 2) take on a new job at a stable with Flicka in tow. As they settle in, the stable owner's teenage daughter and budding equestrian rider Kelly (Kacey Rohl; The Killing, Red Riding Hood) quickly bonds with the wild horse. Kelly hopes to break Flicka for an upcoming competition, despite her mother's (Lisa Hartman; Knots Landing) disapproval.

As the competition approaches, a rival trainer with a knack for stealing business causes a stir and arouses a growing fear that the family may be forced to sell the stable, but in the nick of time Toby steps in to turn things around for Kelly and her mother.

Flicka: Country Pride was directed by Michael Damian (Flicka 2, The Young and Restless) and written by Jennifer Robinson (Flicka 2) and is the perfect gift for horse lovers.