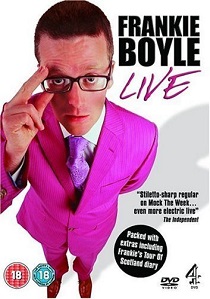 NewsStandup Comedy
News Article Go back to homepage
Featuring 90 minutes of raw and uncut material, caustic Caledonian Frankie Boyle is set to ruffle a few feathers with his lethal brand of distinctively un-PC wit in his first live stand-up DVD Frankie Boyle Live, released by 4DVD on 10th November 2008.
Frankie Boyle
Channel 4 DVD
1 hour 30 minutes
10/11/2008
Thank you for supporting DVD365.net when you order using the link(s) below. As an Amazon Associate we earn from qualifying purchases
Buy DVD
Information

Featuring 90 minutes of raw and uncut material, the hotly-anticipated release also includes a host of exclusive never-seen-before DVD extras from one of the most acerbic wits in the business.

The standout act on BBC2's top-rated satirical comedy show Mock The Week, Boyle is currently one of the hottest comedians in the UK. His brand of pithy observational stand-up and brutal but perfectly constructed one-liners pulls no punches, proving he is one of the best gag writers in the business.

Recorded live this year at London's Hackney Empire theatre, there are no gimmicks to this set, just the sharp-suited Scotsman firing 'cynicism-coated treats' Metro into the atmosphere with unparalleled finesse.

Unleashing his razor-sharp wit upon the audience with jokes that are too near the knuckle for TV, Frankie constantly ventures onto thin ice with outrageous jibes that could be utterly offensive if not delivered with equal measures of visceral cheek and sarcasm, demonstrating the full force of his comic prowess. Armed with an impressive arsenal of punch lines which range from the distasteful to the downright sick, this performance shows Boyle at his edgiest, as he proceeds to target everyone from Anne Widdecombe to Amy Winehouse with scathing aplomb.

Matching the confidence and composure of a master comedian with the energy and enthusiasm of an eager young star, the results are never less than sensational. With a thoroughly modern spin on a traditional observational style, Frankie presents his universal humour with boundless energy that is impossible to ignore.

DVD extras include: an exclusive commentary with Frankie and friends road testing herbal highs, all five Rush Hour sketches and a documentary; Frankie's very own behind-the-scenes tour of Scotland titled F**k Off Scotland which will give viewers a glimpse of some of the unseen wonders of the North.

DVD
In Brian And Charles, released on DVD and Blu-ray 10th October 2022 from Mediumrare, an inventor lives alone in a remote village in the countryside, inventing useless things out of found objects in his garage. That is until ... END_OF_DOCUMENT_TOKEN_TO_BE_REPLACED
Top PicksView