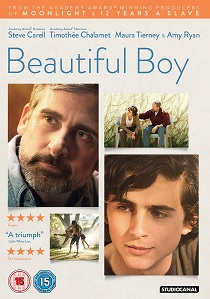 NewsDrama
News Article Go back to homepage
Based on the memoirs by David Sheff and by his son, Beautiful Boy, released on DVD and Blu-ray 20th May 2019 from StudioCanal, chronicles the heartbreaking and inspiring experience of survival and recovery in a family coping with addiction over many years.
Steve Carrell, Timothée Chalamet, Maura Tierney, Amy Ryan, Oakley Bull, Christian Convery
Felix Van Groeningen
Dede Gardner, Jeremy Kleiner
StudioCanal
2 hours 0 minutes
20/05/2019
#BeautifulBoy
Thank you for supporting DVD365.net when you order using the link(s) below. As an Amazon Associate we earn from qualifying purchases
Buy DVD
Buy BD
Information

Starring Academy Award nominees Steve Carell (Foxcatcher, The Big Short) and Timothée Chalamet (Call Me by Your Name), Beautiful Boy is a deeply moving portrait of a family's unwavering love and commitment to each other in the face of their son's addiction and his attempts at recovery. As Nic repeatedly relapses, the Sheff's are faced with the harsh reality that addiction is a disease that does not discriminate and can hit any family at any time.

From the producers of Moonlight and 12 Years a Slave and adapted from David and Nic Sheff's best-selling memoirs by BAFTA Award winner Luke Davies (Lion), Beautiful Boy is a searingly honest account of the ways addiction can destroy lives and the power of love to rebuild them.

Beautiful Boy is released on DVD and Blu-ray 20th May 2019 from StudioCanal.