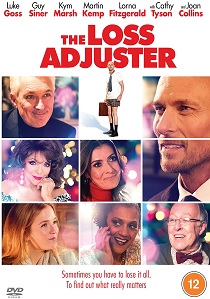 NewsComedyDrama
News Article Go back to homepage
In The Loss Adjuster, released on DVD 30th November 2020 from Pink Flamingo Films, a hapless Insurance Loss Adjuster feels his life is spiralling out of control but discovers that even when you reach rock bottom, that some clouds really do have a silver lining.
Luke Goss, Joan Collins, Kym Marsh, Martin Kemp, Guy Siner
Vince Woods
Ross Connock, Jayney Mackie
Pink Flamingo Films
1 hour 40 minutes
30/11/2020
#TheLossAdjuster
Thank you for supporting DVD365.net when you order using the link(s) below. As an Amazon Associate we earn from qualifying purchases
Buy DVD
Information

Martin Dyer is a very ordinary man with a very ordinary life. An insurance Loss Adjuster for many years, he spends his time assessing other people's problems and ignoring his own. His wife Angie aspires to greater things and when finances hit rock bottom, she leaves him for a suave loan shark one week before Christmas.

Martin is crest fallen but forced into continuing his day by the overly exuberant company secretary, who has scheduled several claims for Martin to validate. With a heavy heart, Martin sets off, but his day drastically goes from bad to worse with a catalogue of extraordinary and humorous encounters with a flirtatious and rather amorous widow, a corrupt doctor, a lascivious female escort and a dead rat.

It is only at the funeral of a client that Martin has an epiphany and with the help of his unlikely friendship with a teenage thief, life suddenly changes in a truly remarkable way.

The Loss Adjuster is released on DVD 30th November 2020 from Pink Flamingo Films.