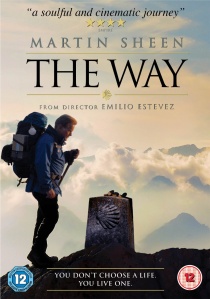 Icon Home Entertainment presents the heart-warming father and son masterpiece The Way from director Emilio Estevez. Released on DVD on 31st October 2011, this touching story follows an American father embarking on a breath-taking journey to complete the trek of his late son, who died while travelling the Pilgrim path across The Pyrenees.

Golden Globe Award® Winner Martin Sheen (The West Wing, The Departed) and real life son Emilio Estevez (Young Guns, Bobby) star in this touching film which has so far taken an outstanding £600k at the box office this year. The DVD includes insightful interviews with Sheen and Estevez and a thought-provoking five minute film exploring how community can help with the big questions in life raised in The Way.

The Way tells the deeply-moving story of Tom (Sheen), who travels to France to collect the remains of his adult son Daniel (Estevez), killed in the Pyrenees in a storm while walking The Camino de Santiago, also known as 'The Way of St James'. Driven by his profound sadness and desire to understand his son better, Tom decides to embark on the historical pilgrimage, leaving his life in America behind.

Armed with his son's backpack and guidebook, Tom navigates the 800km pilgrimage from the Pyrenees, to Santiago de Compostela in the north west of Spain, but soon discovers that he is not alone on this journey. While walking The Camino, Tom meets other pilgrims from around the world, all broken and looking for greater meaning in their lives: a Dutchman a Canadian and an Irish writer who is suffering from a bout of 'writer's block'.

From the hardship experiences along The Way this unlikely quartet of misfits create an everlasting bond and Tom begins to learn what it means to be a citizen of the world again, discovering the difference between "The life we live and the life we choose".

The Way shot entirely in Spain and France along the actual Camino de Santiago, providing a stunning backdrop for this beautiful, spiritual and inspiring journey.

UHD
Sam Mendes, the Oscar®-winning director of Skyfall, Spectre and American Beauty, brings his singular vision to his World War I epic, 1917 to DVD, Blu-ray and 4K Blu-ray 18th May 2020 from ... END_OF_DOCUMENT_TOKEN_TO_BE_REPLACED
Top PicksView