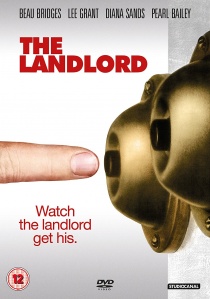 Directed by Hal Ashby, based on the novel by Kristin Hunter and starring Beau Bridges, Lee Grant and Diana Sands, The Landlord is out to own on DVD from 1st October 2012 courtesy of StudioCanal.

In the early seventies, with the impact of Martin Luther king's death still raw, films exploring the impact of racial prejudice and mixed-race relationships were a rarity but one unique exception was The Landlord.

For his directorial debut, Oscar-winning film editor Hal Asby, tells the story of a young, white entrepreneur, Elgar Enders (Beau Bridges: The Descendants), who becomes the landlord of an inner-city tenement, with the intention of evicting the present occupants and constructing a luxury home for himself. What he doesn't anticipate is the opposition he faces from the current low-income, streetwise residents. In the course of their dispute he unexpectedly starts to become fond of them and abandons the development, instead planning on a restoration. He even romances black tenants Lanie (Marki Bey) and Fanny (Diana Sands). But his naivety creates unforeseen problems and raises the question of whether true harmony can ever exist between people of such varying social and ethnic backgrounds.

The Landlord is a mix of social satire, urban drama and high comedy with an outstanding ensemble cast which includes the late Diana Sands as Fanny, who has an ill-fated affair with Elgar, Louis Gossett Jr. as Copee, Fanny's enraged husband, Marki, resident fortune teller who introduces Elgar to soul food. And last but not least, Lee Grant who plays Elgar's high society mother. Her performance received a Best Supporting Actress nomination that year at the Oscar ceremony.

UHD
Almost four decades after he drew first blood, Sylvester Stallone is back as John Rambo in a deadly journey of vengeance as Rambo: Last Blood is released on DVD, Blu-ray and 4K UHD 13th January 2020 ... END_OF_DOCUMENT_TOKEN_TO_BE_REPLACED
Top PicksView