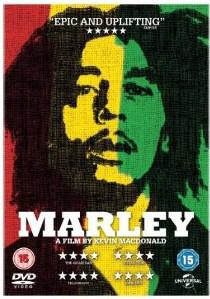 NewsMusicHistory
News Article Go back to homepage
Inspired by one of the 20th Century's most iconic and respected artists comes the definitive film about his life. Discover the story behind some of the best-known music in history, as Marley is released on Blu-Ray, DVD and Digital Download on 20th August 2012 from Universal Pictures (UK).
Chris Blackwell, Cedella Marley, Rita Marley, Jimmy Cliff, Ziggy Marley, Bob Marley
Kevin Macdonald
Geraldine Hawkins, Sam Dwyer, Chris Blackwell, Steve Bing
Universal Pictures (UK)
2 hours 24 minutes
20/08/2012
Thank you for supporting DVD365.net when you order using the link(s) below. As an Amazon Associate we earn from qualifying purchases
Buy DVD
Buy BD
Information

Inspired by one of the 20th Century's most iconic and respected artists comes the definitive film about his life. Discover the story behind some of the best-known music in history, as Marley is released on Blu-Ray, DVD and Digital Download on 20th August 2012 from Universal Pictures (UK). This musical and cinematic masterpiece will also be available as an Ultimate Collector's Edition Blu-ray and available with UltraVioletT capabilities.

Bob Marley's message of love and redemption are known around the globe and are brought to life in this world-first authorised documentary. Using never-before-seen archive footage, courtesy of the Marley family, BAFTA® and Academy Award® winning director Kevin Macdonald (Last King of Scotland, State of Play) takes us on a journey through the life and legacy of the man responsible for introducing the world to reggae.

From his humble beginnings in Trench Town, Kingston, Marley reveals the motivation behind the music and gives unprecedented insight into the intense thinking behind his song-writing, relationships, his views on politics, family and Bob Marley's role as a provider within the local community. Included are the historical performances at the Lyceum Theatre in London and The Wailers' first big concert supporting The Commodores at Madison Square Garden. Bob Marley's message transcend culture, language and creed and still resonates around the world as powerfully as when he was alive. Only a handful of musicians have ever achieved such an impact and Bob Marley, though his life was far too short, stands strong among them.

Interwoven into the heart of the story are contributions from those closest to him including his children Cedella and Damian Marley, his wife Rita Marley, band member Bunny Wailer and his mentor and founder of Island Records, Chris Blackwell. The first documentary to be made with support of the Marley family, the film features rare unseen footage, incredible performances and intimate interviews with the people that knew him best.

An Ultimate Collector's Edition Blu-ray is also available to buy and is no doubt the perfect package for any Marley fan. This collector's piece comprises 150 pages of new and exclusive material in a stunning hardback photo book, plus the official Marley soundtrack on vinyl and CD, poster, T-shirt and keepsake tin to complete the experience.

Available in the UK and US, UltraVioletT is an exciting new way for consumers to collect and enjoy movies and TV shows. They can access their entertainment collection via the cloud, allowing download and instant stream capabilities to computers, tablets, smart phones and beyond. UltraVioletT is compatible with iOS devices, such as iPad®, iPhone®, iPodT touch and Android devices, as well as laptops and PCs. So now, consumers can watch and enjoy their movies and TV shows anytime, anywhere, on the platform of their choice!

HotUHD
After moving to a new town, two brothers discover that the area is a haven for vampires as the classic The Lost Boys is released on 4K UHD 20th September 2022 from Warner Home Video. END_OF_DOCUMENT_TOKEN_TO_BE_REPLACED
Top PicksView