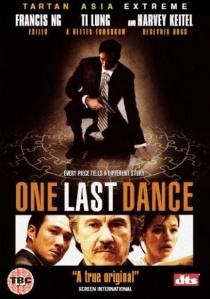 Set in Singapore, T is a ruthless assassin with a formidable reputation who is hired to track down the kidnappers of a business man's son, an incident which involves his good friend. Ko. Yet his actions could be compromised by this long-term friendship with the captain of police, and his love for Ko's sister. He kills them one by one but with every death he gets closer to the shocking revelation of the final name.

One Last Dance, released by Tartan Video on 24th September 2007, relishes its shadowy inner city environment riddled with bullets, enabling director Max Makowski to bend and twist the tension along with the chronological order of events. It provides a jigsaw of suspense with a multi-layered narrative, making T's dilemma even more pronounced.

The cast also includes top Hong Kong action hero Francis Ng (Infernal Affairs 2; Heroic Duo; Exiled) as the mysterious assassin T, a man who seems to have accepted his fate and Ti Lung (from John Woo's A Better Tomorrow) who adds an element of comedy into the heightened drama.

One Last Dance is an arresting, power-punching experience.

UHD
The surviving members of the resistance face the First Order once again, and the legendary conflict between the Jedi and the Sith reaches its peak as Star Wars: The Rise of Skywalker is released on ... END_OF_DOCUMENT_TOKEN_TO_BE_REPLACED
Hot PicksView