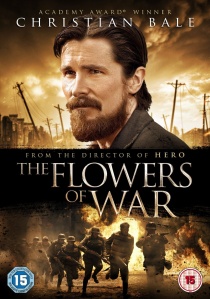 Set in 1937 during the Japanese army's notorious 'Rape of Nanjing', Yimou Zhang (House of Flying Daggers, Hero) directs the Chinese historical war drama The Flowers of War, released on DVD and Blu-ray on 18th August 2014, courtesy of Kaleidoscope Home Entertainment.

Sent to Nanjing to bury the foreign head-priest of a convent for Catholic girls, American mortician John Miller (Christian Bale) arrives shortly after the city is bombed and invaded by Japanese forces. Miller and his group of resident teenage schoolgirls soon find themselves thrown together with a group of local prostitutes who arrive at the convent seeking shelter from the pillaging Japanese soldiers.

After hiding the prostitutes in the cellar, Miller, posing as the convent's priest, embarks on a desperate plan to prevent the schoolgirls from falling into the hands of the marauding Japanese army.

HotUHD
After moving to a new town, two brothers discover that the area is a haven for vampires as the classic The Lost Boys is released on 4K UHD 20th September 2022 from Warner Home Video. END_OF_DOCUMENT_TOKEN_TO_BE_REPLACED
Top PicksView