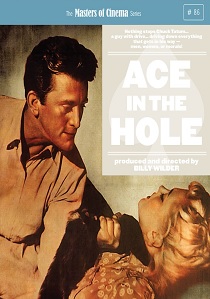 Since re-emerging in the 2000s, Billy Wilder's superb Ace in the Hole, so ahead of its time in the 1950s with its acidic and unflinching examination of journalistic ethics and human morality, has taken its place alongside Double Indemnity, Sunset Boulevard, and The Apartment as among the director's greatest works.

In one of the most powerhouse performances in American screen-acting, the great Kirk Douglas stars as Chuck Tatum, a newspaper reporter who stumbles upon a potentially career-making story in Albuquerque, New Mexico (nearly sixty years later, the setting for Vince Gilligan's Breaking Bad). When Tatum begins to influence the story's outcome, a descent begins that finds more than one man caught between a rock and a hard place.

An electric narrative that stands as one of Wilder's tautest and most (melo)dramatic plots (penned with Lesser Samuels and Walter Newman), Ace in the Hole plays today as both a prescient examination of the modern media landscape, and the public appetite for the disastrous news-story that leads to toxic wish-fulfillment. - "I can handle big news and little news. And if there's no news, I'll go out and bite a dog." - The Masters of Cinema Series is proud to present our third major Billy Wilder release with this stunning Dual Format (Blu-ray + DVD) edition of Ace in the Hole, released on 5th May 2014.