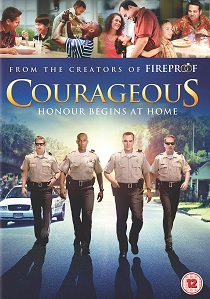 The latest film from Sherwood Pictures and Alex and Stephen Kendrick (Fireproof, Facing the Giants and Flywheel) is the action-packed inspirational drama Courageous, debuting on DVD on 27th February 2012 from Sony Pictures Home Entertainment and AFFIRM Films.

Courageous will have families laughing and cheering as they are inspired by everyday heroes who long to be the kinds of dads that make a lifelong impact on their children. Bonus materials include four behind-the-scenes featurettes, deleted scenes, a blooper reel and commentary by The Kendrick Brothers.

As law enforcement officers, Adam Mitchell, Nathan Hayes and their partners willingly stand up to the worst the world can offer, yet at the end of the day, they face a challenge that none of them are truly prepared to tackle: fatherhood. While they consistently give their best on the job, they quickly discover that their children are beginning to drift further away from them. When tragedy hits home, these men are left with a newfound urgency to renew their faith and reach out to their own children. Will they be able to find a way to serve and protect those who are most dear to them?