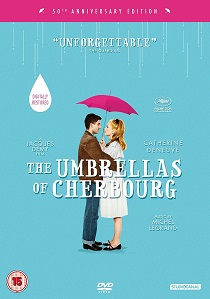 Guy Foucher (Nino Castelnuovo), a 20-year-old French auto mechanic, has fallen in love with 17-year-old Geneviève Emery (Catherine Deneuve: Belle de Jour), an employee in her widowed mother's chic but financially embattled umbrella shop. On the evening before Guy is to leave for a two-year tour of combat in Algeria, the pair share a passionate night. Geneviève becomes pregnant and then must choose between waiting for Guy's return or accepting an attractive offer of marriage from a wealthy diamond merchant (Marc Michel: Lola).

The film was scored by legendary composer and three-time Oscar winner Michel Legrand, who went on to work on films such as The Thomas Crown Affair, The Go-Between and Yentl. The Umbrellas Of Cherbourg won the Palme d'Or at Cannes in 1964 and the newly restored version premiered in Cannes Classics in 2013.

Here on fully restored DVD and Blu-Ray with over four hours of superb extras, including many new and exclusive, The Umbrellas Of Cherbourg is a must-have for musical lovers, fans of French New Wave cinema and any true romantics!