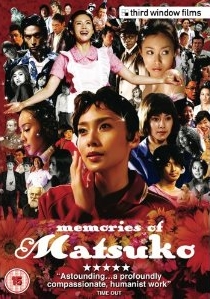 Japanese director Tetsuya Nakashima (Kamikaze Girls) has rapidly earned himself a reputation as a hugely talented and idiosyncratic auteur whose genre-busting films have been favourably compared to the work of directors such as Tim Burton (Charlie And The Chocolate Factory; Big Fish), Baz Luhrmann (Moulin Rouge; Romeo And Juliet) and Jean-Pierre Jeunet (A Very Long Engagement; Amelie). Now, Nakashima's award winning Memories Of Matsuko, released by Third Window Films on 12th January 2009, comes to DVD riding a wave of critical acclaim.

Nominated for nine Japanese Academy Awards (including Best Director and Best Screenplay) and the winner of three (including a Best Actress Award for leading lady Miki Nakatani), Memories Of Matsuko is an uplifting 'Amelie'-esque fairytale that gracefully, colourfully and musically glides through the decades, from the 1950s to the early part of the 21st Century, telling the touching and remarkable story of one woman's life.

When the body of a female tramp is found in the park, her nephew, Shou, is called upon to clean out her abandoned apartment. In doing so, he unwittingly embarks upon a surprising journey through the extraordinary life of his aunt, Matsuko (Nakatani), a starry-eyed young woman ever searching for her prince. Speaking to several of Matsuko's's many acquaintances, including her punk rocker neighbour and her rich and successful porn star friend, Shou gradually pieces together his aunt's life story, from her beginnings as a neglected child, to her various adult incarnations as a school teacher, a massage parlour girl, a murderer, a prison inmate, a yakuza moll and, finally, a mentally disturbed bag lady.

Brilliantly directed by Nakashima, Memories Of Matsuko pays knowing and affectionate homage to a host of cinematic influences, from the saturated Technicolor visual style of 'Gone With The Wind' and the 1950s melodramas of Douglas Sirk to Disney's animated fairytales and the musicals of Bob Fosse.

Hailed as 'astounding... a profoundly compassionate, humanist work' by Time Out, and as 'a splendidly bonkers tragicomedy... a fizzy, enthralling ride' by The Times, Memories Of Matsuko also features a stellar turn by stars Miki Nakatani (The Ring 2; When The Last Sword Is Drawn), one that Sight And Sound called 'one of the best performances of the year.'