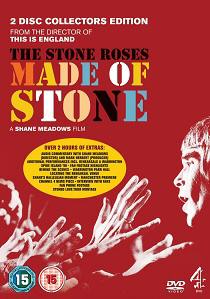 NewsMusic
News Article Go back to homepage
Brought to you by Shane Meadows and Mark Herbert, prepare for a rollercoaster journey through the highs and lows of one of Britain's most iconic bands as 4DVD present The Stone Roses: Made of Stone, out to own DVD & Blu-ray from 21st October 2013.
John Squire, Ian Brown, Shane Meadows
Shane Meadows
Robin Gutch, Sam Dwyer, Libby Durdy, Katherine Butler
Channel 4 DVD
1 hour 37 minutes
21/10/2013
#StoneRoses @MadeOfStoneFilm
As an Amazon Associate we earn from qualifying purchases
Buy DVD
Buy BD
Information

Brought to you by BAFTA award-winning director, Shane Meadows (This is England '86 & '88) and Mark Herbert (Kill List, Tyrannosaur, Submarine), prepare for a rollercoaster journey through the highs and lows of one of Britain's most iconic bands as 4DVD present The Stone Roses: Made of Stone, out to own on single-disc DVD & 2 Disc Collectors Blu-ray & DVD Edition from 21st October 2013.

In 2012 a resurrection no one thought possible took place when legendary band The Stone Roses reformed after 16 years. With unprecedented access to previously unseen archive footage, Shane Meadows presents, THE The Stone Roses: Made of Stone, a revealing documentary about the life of one of the most revered and influential bands in British music history. Packed with hours of exclusive extras and available on single-disc DVD and a special collectors 2 disc Blu-ray & DVD Edition, this is a must have purchase and available to own on 21st October 2013.

Acclaimed film maker and self-proclaimed STONE ROSES super fan Shane Meadows presents a touching documentary by bringing his unique directorial style, humour and emotional depth to the film by capturing the band at work and in their everyday lives as they rehearsed for their much-anticipated reunion, which culminated in three triumphant homecoming gigs at Manchester's Heaton Park in front of 220,000 adoring fans.

Vocalist Ian Brown, guitarist John Squire, bassist Gary 'Mani' Mounfield and drummer Alan 'Reni' Wren make up the legendary four piece who formed in Manchester in 1986. In October 2011 the impossible happened, the band called a press conference and announced they had reunited. This DVD is the chance to be part of one of the biggest comebacks Britain has ever seen, all captured on camera by director Shane Meadows and available to own this autumn.

The DVD, and Collectors Edition are packed with exclusive extras, including an insightful travelogue of the European Tour including live performances, a director/producer commentary, plus loads more!

Incorporating never-before-seen material spanning the band's musical history, the personal experiences of many of those touched by the band and their music, and unparalleled access to the record-breaking sell-out concerts which took place in summer 2012, The Stone Roses: Made of Stone is the last chance to revisit the astounding comeback of the definitive band of the past 25 years.

HotDVDBDDIGITAL
Batman: The Long Halloween, Part Two, released on DVD and Blu-ray 9th August 2021 from Warner Home Video, continues as the Holiday Killer is still at large and, with Bruce Wayne under the spell of the venomous Poison Ivy, Batman is nowhere to be found. END_OF_DOCUMENT_TOKEN_TO_BE_REPLACED
Top PicksView