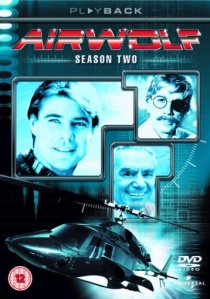 Airwolf : Season Two, the Don Bellisario (Magnum PI) created show about the adventures of a high tech helicopter and its reclusive pilot Stingfellow Hawke, is available to own on DVD from 12th March 2007 from Universal Playback.

Hawke is an idealist and reluctant hero, who struggles to survive national, and occasionally, international intrigue with the aid of the awesomely powerful weapon Airwolf.

Airwolf is an action-show, a scenario of challenge; of subtlety against strength and strength against treachery. But it is not a high-tech space opera - the chopper is the tool, not the tale. The story is of Stringfellow Hawke, as realistically and plausibly told as possible. Hawke is a driven man of convictions, who has been blessed, and cursed, with the means to dramatically affect the situation or meet any challenge he encounters.

A show that more than earns its cult status - seize the Airwolf Season Two DVD while it's still hovering within your reach!