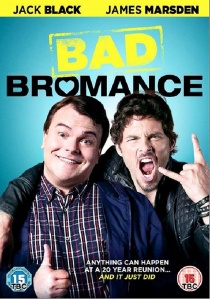 Written and directed by Jarrad Paul (Yes Man) and Andrew Mogel, Bad Bromance stars Jack Black (Kung Fu Panda series, School of Rock) as Dan Landsman, the socially awkward head of a high school reunion committee determined to finally win his former classmates' approval by convincing the most popular guy from their graduating class, Oliver Lawless, played by James Marsden (X-Men series, Enchanted), to attend their reunion. Willing to do anything - including engaging in a night of hilariously debauched partying that must be seen to be believed - Dan soon discovers he may have gone too far in the name of high school popularity.

Dan Landsman (Jack Black) is the overly enthusiastic head of his high school reunion committee and also the group's laughingstock. To impress his so-called friends, he vows to convince their most famous former classmate-Oliver Lawless (James Marsden), the star of a national Banana Boat TV commercial-to attend the reunion to increase attendance. Dan travels to Los Angeles and spins a web of lies, igniting an intoxicating excitement for the first time in his humdrum life. In exchange for Oliver's precarious friendship, Dan sacrifices his relationships with his wife, son, and boss, and loses himself in his obsession for approval and recognition.

UHD
Bursting with indelible characters, quotable dialogue and jaw-dropping special effects, Tremors is back and bigger than ever in this 4K-restored and fully loaded collectors' edition, available on 4K ... END_OF_DOCUMENT_TOKEN_TO_BE_REPLACED
Hot PicksView

Hacksaw Ridge is the extraordinary true story of Desmond Doss who, in Okinawa during the bloodiest battle of WWII, saved 75 men without firing or carrying a gun. He was the only American soldier in WWII to fight on the front lines without a weapon, as he believed that while the war was justified, killing was nevertheless wrong. As an army ...
Movie quote